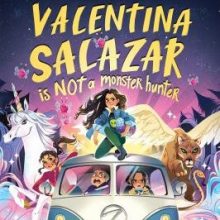 Valentina Salazar is NOT a Monster Hunter by Zoraida Córdova

As the title makes clear, the main character of this novel is not a monster hunter – she’s a monster protector! …Or at least she used to be.

For all of Valentina’s life, the Salazar family has protected the “monsters” who show up in our world and sent them back where they belong – these are creatures who more often than not are just scared and want to go home, and the Salazars could help them get there.

But in the wake of her father’s gruesome death after tangling with a creature, the rest of the family imploded. Valentina’s oldest sister ran away to join other Salazars in hunting monsters and her mother has taken the rest of her children to the small town of Missing Mountain to go to an actual public school. In the new town, eleven-year-old Valentina is the only one of her remaining siblings who hasn’t found her place – and just wants to get back to protecting creatures that belong in another world, a desire the rest of her family disapproves of.

However, when Valentina sees a livestream of a creature’s egg about to hatch, she knows what she has to do – it’s time to revive her father’s legacy. Her siblings Lola and Rome reluctantly agree to help – one last mission – and they’re off on a road trip across the country, protecting creatures, meeting with allies, clashing with monster hunters, and, along the way, starting to heal from the grief that’s been hanging over their family.

Valentina’s story is told with spunk and determination; she loves her family, but she also fights to uphold the values her father taught her and honor his memory rather than try to bury or ignore the past the way she thinks the rest of her family is (even though some readers might recognize how the rest of the family is grieving and coping in their own way). The story is set against a rich backdrop of fascinating creatures, complex and emotional family dynamics and a race against time; it’s a compelling combination that’s hard to put down!

Check out the book that a (starred!) Kirkus Review called “fun and heartwarming,” a (starred!) Booklist review called “a wonderful read,” and a Publisher’s Weekly review described as a story that came “aglow as it [unfolded]” and “radiat[ed] warmth, humor, and a love of the fantasy genre on every page.”