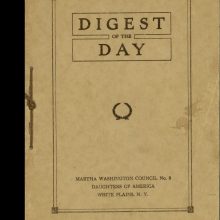 Recently a member of the local Daughters of the American Revolution (DAR) chapter viewed the Local History Room’s file on the DAR.  She noted that the last item in the file belonged to the Daughters of America, not the DAR, and was curious what that group was.

The item in question is a 36-page booklet called Digest of the Day, published in 1930 by the Daughters of America’s Martha Washington Council No. 8 in White Plains.

According to The International Encyclopedia of Secret Societies and Fraternal Orders, the Daughters of America was “a female auxiliary to the Junior Order of United American Mechanics founded in Bennett, Pennsylvania, in 1891…In its heyday, it combined a poisonous brand of the Know-Nothing anti-immigration sentiment with advocacy of Bible reading in public schools.” 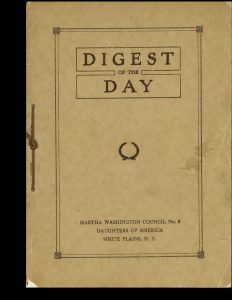 The 1930 White Plains city directory says the Daughters of American met on the second and third Tuesdays at 31 Main Street, where Mechanics Hall was located. But they disappear from the directory after 1934.

Page three of Digest of the Day lists nine object of the Daughters of America, and the first one shows that it was Nativist: “To promote and maintain the interests of Americans and shield them from the depressing effects of unrestricted immigration.”  Other objectives include, as already mentioned, to maintain the reading of the Bible in public schools, and to give financial support to sick or disabled members and the children of deceased members. 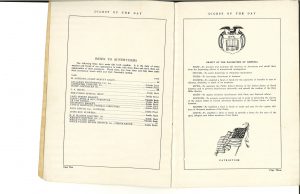 The content of Digest is directed “to meet the needs of the largest number of people, especially the housewife” It includes recipes, home remedies, laundry helps, and exercise charts with illustrations courtesy of the International Life Insurance Company. 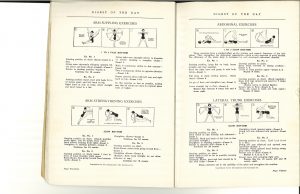 Digest of the Day gives a sense of gender roles and attitudes toward immigration and public education in 1930. It also indicates the importance of mutual aid societies before Social Security and other federal aid programs. Anyone who would like to look at Digest is welcome to stop by the Local History Room. And if you have more information or literature about the Daughters of America, particularly Martha Washington Council No. 8, please let me know by email or in the comment section below!