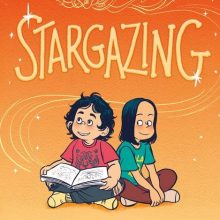 Thursday, December 22nd at 4:30 p.m.
Click here to register for our Book Bunch
Join Caroline for a book discussion and trivia game for 4th through 8th graders! We will be reading Stargazing by Jen Wang. This is a perfect read to celebrate the holiday season.

Stargazing is a graphic novel by Jen Wang. The book is about a friendship between two Chinese American girls Christine and Moon. Soon the two girls become best friends and share their favorite books and videos, and confide in each other. When Moon tells Christine a secret (that she has visions from celestial beings), will Christine accept Moon’s visions as reality? When Moon ends up in the hospital, can Christine become the friend that Moon needs? Stargazing is a whimsical story about a deep bond between two Chinese American girls.

The Trove will provide a free copy of the book for the first eight individuals to register for the discussion. When the books are available, we will email to arrange pickup; please list an email address and phone number when registering. You can place a hold on the book using our catalog If you prefer the eBook, you can find it on Libby here.

Here are some other suggestions:

“A Somali boy living in a refugee camp in Kenya tries to make a future for himself and his brother in this near memoir interpreted as a graphic novel by collaborator Jamieson. Omar Mohamed lives in Dadaab Refugee Camp in Kenya with his younger brother, Hassan, who has a seizure disorder, and Fatuma, an elderly woman assigned to foster them in their parents’ absence. The boys’ father was killed in Somalia’s civil war, prompting them to flee on foot when they were separated from their mother. They desperately hope she is still alive and looking for them, as they are for her. The book covers six years, during which Omar struggles with decisions about attending school and how much hope to have about opportunities to resettle in a new land, like the United States. Through Omar’s journey, and those of his friends and family members, readers get a close, powerful view of the trauma and uncertainty that attend life as a refugee as well as the faith, love, and support from unexpected quarters that get people through it. Jamieson’s characteristically endearing art, warmly colored by Geddy, perfectly complements Omar’s story, conjuring memorable and sympathetic characters who will stay with readers long after they close the book. Photographs of the brothers and an afterword provide historical context; Mohamed and Jamieson each contribute an author’s note. This engaging, heartwarming story does everything one can ask of a book, and then some.” –Kirkus Review

“Thirteen-year-old Aster is of age to find the animal that will deem him worthy to take its shape as a shape-shifter. There’s just one problem. Aster doesn’t want to shape-shift—he wants to do witchery, which is forbidden for boys.Aunt Vervain teaches witchery to the girls, and Aster hides, taking careful notes—but he’s caught. His mother tells him a family secret: his grandmother’s male twin was attracted to witchery. After dabbling in forbidden magic, he morphed into something terrible, caused a disaster in their village, and was cast out. Though Aster’s horrified, he can’t resist practicing magic alone in the woods. To his delight, it works, but he’s seen by Charlie, a black girl from outside his community, and eventually she becomes the confidante and adviser he’s needed. On the night of the Finding, a boy is taken by a mysterious creature. Aster knows he can help with witchery, but he’d have to admit how much he’s learned. Ostertag’s story is straightforward, acting as a parable for gender conformity that’s pitched just right to middle-grade audiences. Her panels are clear, colorful, and friendly, and her worldbuilding flawless, Aster’s magic-working community sitting cheek by jowl with Charlie’s suburb. Characters are all different races: Aster’s mother appears white, his father appears black, and Aster has darker skin than his mother but has her red hair. With charming artwork, interesting supporting characters, natural-feeling diversity, and peeks of a richly developed world, this book leaves readers wishing for more.”-Kirkus Review