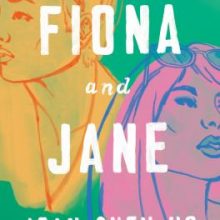 The White Plains Library Staff have assembled their picks for the year, featuring mystery, audiobooks, fantasy, and more. It's a wonderfully wide-ranging list, full of lots of surprises, and should help with your holiday shopping or just some entertainment for yourself. Enjoy!

Below you'll find a list with links to the catalog or resource where they're available as well as a blurb on why staff enjoyed it. 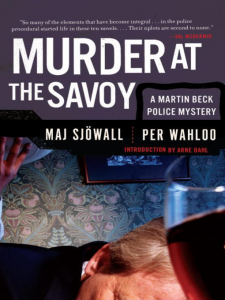 Murder at the Savoy by Maj Sjowall and Per Wahloo.
Library Catalog
This is the sixth novel in the Martin Beck series, Beck being the go-to detective in Sweden's National Homicide Squad circa 1965 to 1975. There is a great ensemble cast in these novels as well. The murder of a business executive exposes the class divisions in Sweden at the time.–Austin Duffy, Local History Librarian.

The Lindbergh Nanny by Mariah Fredericks.
Library Collection
Libby: eBook
hoopla: Audiobook
Most of us are familiar with the kidnapping of the Lindbergh baby in 1932, which was known as “the crime of the century.” So what can a fictionalized version offer readers today? A whole lot more, it turns out, as Fredericks has Betty Gow, the baby’s nanny, narrate the tale. As readers of Fredericks’ Jane Prescott mysteries can testify, the author is especially adept at historical settings. But The Lindbergh Nanny can cross-over in all kinds of directions, and will appeal to readers of crime fiction, historical fiction, women’s fiction, and those just needing a wonderful read.—Brian Kenney, Library Director.

The Cloisters by Katy Hays.
Library Collection
Libby: eBook and Audiobook
Fans of Shapiro’s The Art Forger, Perez-Reverte’s The Flanders Panel, and Santlofer’s The Last Mona Lisa will adore this book. After Ann Stillwell graduates from college, she doesn’t waste a minute before heading to New York City’s Metropolitan Museum of Art (Met), where she has a summer position as curatorial associate. But there’s a mix up, and Ann ends up at the Cloisters, the Met’s museum and garden devoted to medieval art, located at the remote northern tip of Manhattan. Not another word out of me, except to say that the depiction of the Met is wonderfully accurate and the characters are spot on.—Brian Kenney, Library Director.

The Thread Collectors by Shaunna J. Edwards and Alyson Richman
Library Collection: Print
Libby: eBook and audiobook
The Thread Collectors is a unique Civil War story drawn from the authors’ real-life ancestral experiences. It offers a tale of resilience and love about two women–one black and yearning for freedom in New Orleans, the other a Jewish abolitionist in New York discover that even the most delicate threads have the capacity to save us.–Sharon Rothman, Adult Services.

Olga Dies Dreaming by Xochitl Gonzalez
Library Collection
Libby: eBook and Audiobook
A tale of two Brooklyn raised siblings, children of radical activists simultaneously following their own paths and seeking their absent mother's approval. Olga and her brother Prieto are both compelling characters who will have you rooting for them in their personal lives while questioning their career choices. I loved the moment when Olga is in a love interest's music room calling out the titles of all of her father's old records and am excited to see this adapted.–Kristen Thornton-De Stafeno, Marketing Librarian

Fiona and Jane by Jean Chen Ho
Library Collection
Libby: eBook and Audiobook
A quiet, character-driven journey of two friends and those who've had the biggest impact on their lives from childhood to middle age. An emotionally deep, yet funny coming-of-age story exploring sexuality, identity, friendship, and more.–Kristen Thornton-De Stafeno, Marketing Librarian

Vicious Creatures by Ashton Noone
Library Collection
Libby: eBook and Audiobook
Ava and her teen daughter move back to her hometown to escape an abusive ex-husband. Secrets from Ava's high school days – including the murder of a friend – haunt her and her daughter as more teens turn up missing and dead in a local forest infamous for hiding secrets. I'd recommend for adult readers who enjoy Karen M. McManus's YA mysteries and want a little more spice.–Kristen Thornton-De Stafeno, Marketing Librarian

Lessons in Chemistry by Bonnie Garmus
Library Collection – Print, Large Print
Libby – eBook, Audiobook
Meet Elizabeth Zott, 1960s feminist hero extraordinaire, a fearless natural beauty ahead of her time, working as a brilliant scientist doing original Nobel research in a chemistry lab where men steal her ideas (and are free with their hands), and women are expected to type and make coffee.  As a struggling single mother, she agrees to host a ground-breaking TV cooking show using her culinary/chemistry skills and becomes a media sensation. Did we mention that Elizabeth has a terrific, insightful dog with a large vocabulary, and that she also rows crew on a competitive men's team?  Debut novelist Garmus offers something for everyone in this lively, witty story of empowerment, touching on many contemporary issues.–Barbara Wenglin, Adult Services

Kagen the Damned by Jonathan Maberry
Library Collection: Print
Bestselling and award-winning author Maberry, known for his horror and action series V-Wars, Rot & Ruin, and the Joe Ledger books, takes a stab at epic fantasy with the first in a new series, Kagen the Damned. Oh did I love this book! Featuring Maberry's trademark compulsively readable writing and humor, ability to write tremendous fight scenes, and an injection of Lovecraftian horror into the epic fantasy setting, I found myself completely engrossed in Kagen's gritty world. This is definitely more Conan the Barbarian than Lord of the Rings, but while Robert E. Howard is definitely an inspiration, Maberry writes a very modern fantasy with a very diverse and inclusive world featuring powerful and well-drawn characters of all colors, genders, and sexualities. And, while the cover quote from Michael Moorcock indicates its for fans of George R.R. Martin, this is more dark pulpy sword and sorcery fantasy than it is the dense Game of Thrones epic fantasy, which is not to say that it isn't filled with political maneuvering, secret cabals, and various factions, religions and countries with their own agendas. I highly recommend Kagen the Damned if you want a fast-paced, interesting, revenge-fueled dark fantasy filled with humor, blood, sex, violence, twisted magic, and cosmic horror, and I personally cannot wait for the sequel, Son of the Poison Rose, to be released early next year.–Joshua Carlson, Manager of Youth Services. 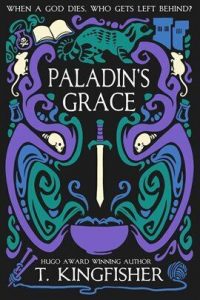 Paladin’s Grace by T. Kingfisher
Ebook on Libby, Ebook and Audiobook on hoopla
Adult Romance/Fantasy
This book masterfully crafts a horror-fantasy romance, with fantastic worldbuilding and relatable characters. Six months ago I never would have imagined recommending anything that could fall into the horror genre, scaredy-cat that I am, but Kingfisher balanced out the horror elements with great relationship development. I devoured the next two books in quick succession and am (im)patiently waiting for book number 4.–Erica Roberts, Youth Services. 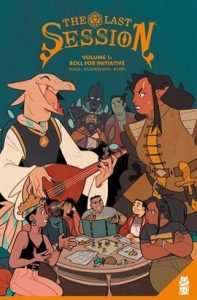 The Last Session Volume 1: Roll for Initiative by Jasmine Walls and DOZERDRAWS
Digital Graphic Novel on hoopla
Teen Graphic Novel
As someone who started playing D&D in college and has had trouble getting the band back together (so to speak), this is a comic that I related to deeply. The story switching back and forth between the real world and the D&D world, but also flashing back to their high school days, really emphasized the parallels and repetitions between past and present, reality and fantasy. The art was gorgeous, the characters were all well-developed, and I can only hope that a Volume 2 is in the works!–Erica Roberts, Youth Services.

Valentina Salazar is NOT a Monster Hunter by Zoraida Córdova
Catalog Print, Ebook on Libby, Digital Audiobook on hoopla
Middle-Grade Fantasy
Valentina’s story is told with spunk and determination; she loves her family, but she also fights to uphold the values her father taught her and honor his memory rather than try to bury or ignore the past the way she thinks the rest of her family is (even though some readers might recognize how the rest of the family is grieving and coping in their own way). The story is set against a rich backdrop of fascinating creatures, complex and emotional family dynamics and a race against time; it’s a compelling combination that’s hard to put down!–Erica Roberts, Youth Services. 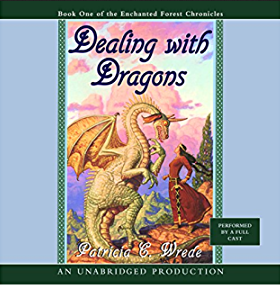 Dealing with Dragons by Patricia C. Wrede
Library Catalog
Libby: eBook and audiobook
This year, my six-year-old discovered audiobooks. In searching for something we could all enjoy in the car, I rediscovered the Dealing with Dragons series, a middle school favorite of mine. Princess Cimorene of the kingdom of Linderwall is bored with traditional princess life; following the advice of a frog, she ends up working for a dragon. She meets an interesting variety of characters and creatures, and eventually uncovers a group of wizards engaged in a dastardly scheme. The adventures were entertaining for my little kids and fairly easy to follow, and I loved picking up on new elements of a familiar story.–Kathlyn Carroll, Edge Librarian

Finding Me by Viola Davis
Library Catalog / Libby
I really enjoyed this memoir, narrated by the author herself Viola Davis. Here, Viola talks about the difficult journey of growing up in Rhode Island to becoming the award-winning actress she is today. Listening to the audiobook makes you feel like you are living her experiences. It is a reminder that with determination and perseverance you can overcome any obstacles you are facing. Her book is definitely an inspirational story.-Mariel Perez, Adult Services.

Will by Mark Manson and Will Smith
Library Catalog: CD Audiobook / Print / Large Print
Libby: Audiobook and eBook
I listened to this audiobook before the infamous Oscar incident and although It was an unfortunate event, I enjoyed his memoir. Narrated by Will, this audiobook is different because of the addition of music clips in the background, making it a lot more entertaining to listen to. Like any other memoir, Will gives us a glimpse into his life, the good, the bad, his mistakes and his need for perfection. Will's narration and music/rapping definitely brings this story to life.–Mariel Perez, Adult Services. 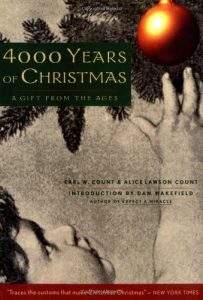 4000 Years of Christmas by Earl Wendel Count.
Library Catalog
This short book explains the pre-Christian origins of many Christmas traditions, including why we celebrate the holiday on December 25. It will help get you into the holiday spirit.–Austin Duffy, Local History Librarian

One Hundred Saturdays: Stella Levi and the Search for a Lost World by Michael Frank
Library Collection: Print
Libby: eBook and audiobook
This books draws from six years of conversations between writer Michael Frank and ninety-nine-year-old Stella Levi. She retells her story from growing up in the old Sephardic Jewish quarter on the island of Rhodes followed by deportation to Auschwitz. Read about the courage and wisdom of this woman who ended up living in a Greenwich Village apartment.–Sharon Rothman, Adult Services.

The Mosquito Bowl: A Game of Life and Death in World War II by Buzz Bissinger
Library Collection – Print, Large Print, CD Audiobook
Libby – eBook, Audiobook
Pulitzer-Prize journalist Bissinger (Friday Night Lights) returns with a well-researched, fascinating story of a bruising football game (dubbed “The Mosquito Bowl”) played between two Marine regiments at insect-infested Guadalcanal during WWII. We follow the lives of some of the best collegiate athletes, now Marines training for the invasion of Okinawa, which would prove to be one of the bloodiest battles of WWII – with 15 of the 65 young players tragically killed in action.  We also learn that the author’s father was a Marine who served at Okinawa – and was never able to talk about it. A compelling, heart-wrenching read, with an unlikely blend of college football, military history and heroics.–Barbara Wenglin, Adult Services