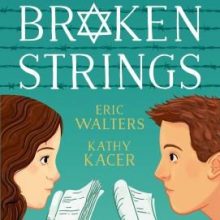 Shirli Berman is so excited for her school’s play this year, Fiddler on the Roof. She has high hopes for the female lead role, but those hopes are dashed – she’s playing the role of the older mother character instead. Shirli is soon distracted from her discontent with the role when she discovers secrets that her grandfather has been burying about his past – and the chemistry she has with her onstage husband Ben Morgan.

The book carefully balances between Shirli’s everyday life and troubles in middle school; her grandfather’s lifelong and varied trauma that he finally starts to unpack rather than repress; and how the recent events of 9/11 impacted so many lives in so many painful ways. Despite the varied emotional beats this layered story could have fumbled, instead it hits all of them perfectly. Choosing to set it in 2002 was a brilliant choice, placing the book in an interesting limbo of not quite historical fiction, but also so clearly from a certain time period (even if 2002 doesn’t feel like it happened long ago enough to be counted as “historical.”)

Check out the book that Booklist Reviews praised for its “rich emotional text [that] manage[d] to feel both contemporary and historic,” Kirkus Reviews called “a beautiful, painful, heartfelt reminder that the past is with us still,” and the School Library Journal described as “a tale that teaches both history and compassion [and] a great choice for middle grade readers.”