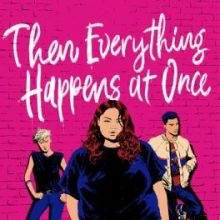 New Books in the Edge

The Davenports by Krystal Marquis
Grades 8 and up
Library Catalog

“Set in 1910, this novel offers readers a glimpse inside the lives of a wealthy Black family from Chicago, the titular Davenports. This novel centers around three teens in the family: Olivia, John, and Helen, along with their friends and associates. Debut author Marquis weaves the characters' stories in such a way that leaves readers anticipating the next chapter each time. This book includes romance, politics, activism, family relationships, and the journey from childhood to adulthood. Will the characters get married to please their parents? Will they follow their own dreams and interests?” –School Library Journal

Then Everything Happens at Once by M. E. Girard
Grades 9 and up
Library Catalog

“Sixteen-year-old Baylee must navigate life against the backdrop of the Covid-19 pandemic. Baylee lives in a suburb of Toronto. She has had a crush on her guy friend Freddie for years but believes he could never like a fat girl like her. Baylee is also talking to Alex, whom she met online, but the energy with Freddie shifts, and it seems like something’s about to happen. Just as Baylee’s love life is starting to look up, the Covid pandemic hits, and she has to contend with its impact on her budding relationships as well as keep her sister, who has serious physical and cognitive disabilities, safe.” –Kirkus Reviews

Promise Boys by Nick Brooks
Grades 9 and up
Library Catalog

“When the principal of venerated Washington, D.C., all-boys charter school Urban Promise Prep is found shot dead under mysterious circumstances, suspicion immediately falls on three students with less than stellar reputations: quiet but temperamental J.B., mischievous but good-natured Ramón, and perpetual troublemaker Trey, all of whom were in detention on campus when the killing took place. Though the trio claim innocence, evidence piles up: Ramón’s hairbrush is found at the scene, J.B. is inexplicably covered in the principal’s blood, and Trey publicly threatened the principal before his death. Additionally, Trey’s uncle’s gun is missing, and authorities assume that Trey stole it. The boys must work together to uncover the truth—behind the murder and Urban Promise Prep’s history—before they lose their promising futures.” –Publisher’s Weekly

“The suspects are photogenic, but don’t let that fool you—some are rotten to the core. Summer is the #PerfectlyImperfect influencer; every part of the 16-year-old Angeleno’s online life is cultivated and calculated. But everything goes out the window when her Halloween party takes a few unexpected turns. The make-believe of a murder-mystery party becomes all too real when Summer winds up dead. With her highly publicized tell-all book contract, there’s no shortage of suspects—it seems like everyone has a motive for wanting to keep secrets from coming to light, including ex-boyfriend Adam, best friend Grace, stalker Cora, and rival influencer Avalon. Whose secret is worthy of murder?” –Kirkus Reviews

As You Walk on By by Julian Winters
Grades 9 and up
Library Catalog
“Best friends Theo, Darren, and Jay have a tradition of daring each other into humorous and occasionally embarrassing situations, such as belting out Mariah Carey in their Louisville, Ky., magnet school’s quad, a welcome distraction from his father’s expectations. Jay dares Theo to ask his crush, Christian, to prom; Theo accepts, excited for the opportunity to have his “big magically gay prom night.” When Theo promposes at a house party, however, Christian reveals that he has a boyfriend. Convinced that Jay knew and set him up, Theo and his friends have an emotional blowout fueled by years of Theo’s buried frustration stemming from internal turmoil as the least affluent and only queer person in their group. Hiding out in an empty bedroom, Theo is eventually joined by fellow partygoers, including his former best friend, Aleah, each of whom is struggling in the aftermath of a hurtful conflict.” –Publisher’s Weekly

“This sequel to Walking in Two Worlds (2021) returns readers to the virtual and real worlds in which a teen girl navigates grief, confronts those who wish to undermine her, and grows in self-confidence. Picking up soon after Anishinaabe teen Bugz has lost her older brother, Waawaate, to cancer, the book immediately plunges readers back into the action…. Kinew (Anishinaabe) presents readers with another well-paced novel set in a vividly realized world in which young people create new paths that are grounded in community and cultural continuity. Plenty of thrills alongside thoughtful, poignant explorations of love and loss.” –Kirkus Reviews

The first book in the series, Walking in Two Worlds, can be found here: Library Catalog.

“Set in the Truly Devious universe, this scintillating mystery by Johnson (The Box in the Woods) follows Ellingham Academy senior and renowned amateur sleuth Stevie Bell, who feels rudderless with no college plans or cases to solve. She misses her boyfriend, David, who is in London, so when he suggests a visit, she and her friends hop on a plane. Upon arriving, David’s classmate Izzy solicits Stevie’s help. In 1995, Izzy’s aunt, Angela, and her eight housemates celebrated their Cambridge University graduation at a country estate. During a drunken game of hide-and-seek, someone murdered two of the attendees with an ax…. Johnson delivers a meticulously crafted fair-play mystery that gratifies as a standalone while also forwarding the richly textured characters’ arcs, a treat for fans of the series.” –Publisher’s Weekly

The first book in the series, Truly Devious, can be found here: Library Catalog / Libby.