Tim has been the Manager of Adult Services since 2011. After earning his MLIS from McGill University, Tim left the Great White North to work at the Baychester Branch of NYPL in Co-op City. Next came a short stint at the Mid-Manhattan Library of NYPL before joining the White Plains Library in 1999. One of Tim’s roles for the Library is serving on the Mayor’s Youth Board where he has developed a close relationship with the White Plains Youth Bureau. Tim’s wife Z is also a librarian in Westchester, Manager of the Crestwood Branch of the Yonkers Public Library, and
Read More 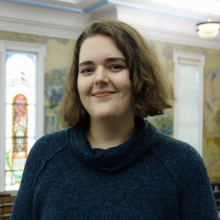 Kristen Thornton-De Stafeno earned her Master of Science in Information Science from UAlbany in May 2017 and started as the Marketing Librarian here in White Plains two months later. Kristen got her start in libraries in 2013 when she began working as a part-time circulation clerk at the Pleasant Valley Library—it was while working there that she decided to pursue a career in libraries due to her passion for promoting equatable access to information and her first-hand knowledge that libraries have the ability to change lives. When not working behind the scenes on marketing content, you can find Kristen at
Read More