Historic Firefighting Equipment on Display in The Trove 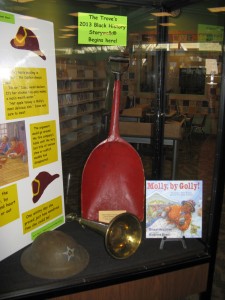 You don’t want to miss the collection of historic firefighting equipment on display in The Trove this month. Several items, on loan from the City of White Plains Local History Collection, have been incorporated into The Trove’s Black History StoryWalk®.

Among the old firefighting hats on display is one worn by past White Plains Fire Chief Griffen. There’s also a wooden debris shovel which was used by Chief Griffen to clean up and scoop out after fires. If you look at the back of the shovel, you can even see the chief’s initials, H. A. G., carved into it.

Be sure to check out the brass trumpet, previously used to call out orders during a fire emergency, and Kelly tool, now part of every fire engine’s equipment! Another old firefighting hat from the Mastic Beach Fire Department on Long Island completes the collection.

The StoryWalk® is based on the book, Molly, By Golly! The Legend of Molly Williams, America’s First Female Firefighter written by Dianne Ochiltree and illustrated by Kathleen Kemly. This is the story about the slave and cook for New York Fire Company No. 11 who became America’s first female firefighter in the early 1800s. Anyone wanting to learn more about firefighting can find places to look at the end of the StoryWalk®.

Patrons are invited to view the StoryWalk® any time the library is open through March 17. Children in grades 1 through 6 complete a form, receive a prize and are entered in a drawing. For more information, inquire at The Compass (information desk) in The Trove.

Note: The StoryWalk® Project was created by Anne Fergusson of Montpelier, VT and developed in collaboration with the Vermont Bicycle & Pedestrian Coalition and the Kellogg Hubbard Library.