New NY Bridge Lego Model On Display In The Trove 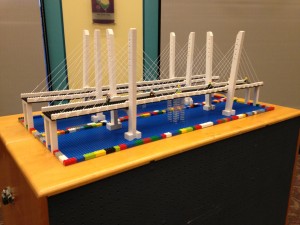 The New NY Bridge to replace the Tappan Zee Bridge will be under construction until 2018, but if you come into The Trove at The White Plains Public Library today, you will be treated to a sneak preview of the completed bridge. Members of the Trove's Lego Club have built a model of the new bridge, all out of Lego blocks, and proudly invite the public to view the completed project.

Each month, members of The Trove's Lego Club meet to design and build their own structures using The Trove's Lego set.This past winter, the theme was bridges. As part of the theme, children in grades 2 through 6 were invited to take on the challenge of building a model of the New NY Bridge out of Lego blocks. Those who signed up met at special times to work on the project. The design for the model was done by The Lego Store at The Westchester Mall. The Lego blocks were purchased by the Westchester Community Outreach Center for The New NY Bridge. Many of the blocks used in the model were ordered directly from the Lego Company in Denmark.

Over a period of two months, the Lego Club members learned a little about bridge construction, a lot about how shapes fit together to build a structure, and even more about working together as a team with a goal in mind. As they received their certificates of participation from the Westchester Community Outreach Center for The New NY Bridge, the members were excited to be a part of the history of this area of New York State and knew that they had done it with Lego! The Lego blocks were purchased by TZC (Tappan Zee Constructors) and the project coordinated with assistance from the New New York Bridge Community Outreach team.