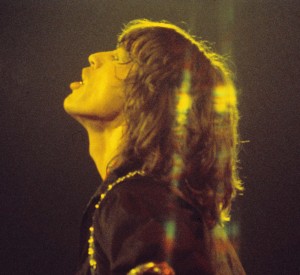 On view March 10 – April 27, 2014 in the White Plains Library Gallery, this exhibit celebrates the golden age of rock and roll in photographs, some never before exhibited, taken by Tapani Talo, a White Plains resident, architect, photographer and, during the time the photographs were taken, a sound engineer for some of the most iconic bands of the era.

Mr. Talo's love of music is evident in the very deep facial expressions and seriousness that comes through. Besides photos from the Rolling Stones 1970 show in Helsinki, other highlights of the exhibit include rare performance images of Led Zeppelin, Clapton, Cream and Blind Faith.

Tapani Talo was born in Finland 1950 where, as a teenager, he designed his first house, was self-employed as a press and fashion photographer, and was employed as a congress technician and sound engineer at the Dipoli Conference Center. Two album covers for John Mayall, Turning Point and USA Union, brought him international attention. From 1973 to 1977, while based on London, Mr. Talo worked with the Rolling Stones as a sound engineer at their Mobile Studio, recording them and other leading Rock and Roll bands of the time. During that time he studied as an architect at the North East London Polytechnic (with their ‘avant garde' Green program), graduating with honors. Beginning in these years and continuing as a lifelong pursuit, he has dedicated extensive study to art museums, painting, photography and art as both a hobby and as an intellectual corner stone for architecture and real practice of it.

An opening reception will be held Sunday, March 9, from 3:00 p.m. – 4:30 p.m. The artist will make brief remarks followed by a Q and A session. The reception and admission to the Gallery are free and open to the public.

This exhibit is made possible with the support of the Friends of the White Plains Public Library.