Were Jews passive during the Holocaust? 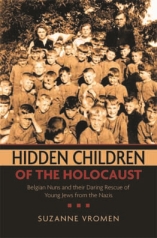 Professor Suzanne Vromen passionately refutes this notion in “Debunking the Myth of Jewish Passivity During the Holocaust,” part of the Distinguished Lecturer series sponsored by the Holocaust and Human Rights Education Center on Sunday, May 18 at 1 pm at the White Plains Library, 100 Martine Avenue, White Plains. This event is co-sponsored with the American Society for Yad Vashem, www.yadvashemusa.org. The program is free and open to the public. No registration is required.

A Professor Emeritus of Sociology at Bard College, Ms. Vromen was living in Belgium when the Germans invaded the country in 1940. After a year under Nazi occupation, she and her family escaped, finding refuge in the Belgian Congo.

Professor Vromen is the author of Hidden Children of the Holocaust: Belgian Nuns and Their Daring Rescue of Young Jews from the Nazis (2008 Oxford University Press). Among her other publications are articles and book chapters on collective memory, nostalgia and commemoration, social theorists Georg Simmel and Maurice Halbwachs, the identities of Jewish-American women and Hannah Arendt's Jewish identity. In her most recent essay (2013) she discusses the linkages between family and religion expressed by children hidden in convents during the Holocaust.

May 15, 2014 6:00 am | by Kathleen Degyansky, Assistant Director
Categories: Homepage and Library News.