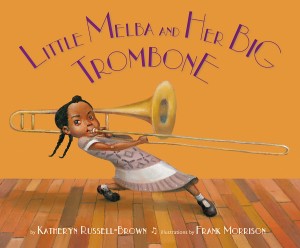 Celebrate black history by taking the latest StoryWalk® in The Trove! The book being featured is Little Melba and Her Big Trombone, written by Katheryn Russell-Brown and illustrated by Frank Morrison. It is the story of African American jazz musician Melba Doretta Liston, the first woman trombonist to play in the big bands during the 1940s, 1950s and 1960s — how she selected the trombone as her instrument, taught herself how to play it, and later went on to teach many of the great musicians of the twentieth century.

Little Melba and Her Big Trombone was selected as one of two Coretta Scott King Illustrator Honor Books for 2015.

The StoryWalk® opens Sunday, February 15, 2015 and continues through Sunday, March 15, 2015.  Children in grades 1 through 6 complete a form, receive a prize and are entered into the drawing for a bigger prize. Instructions and forms are available at the Children’s Information Desk (The Compass) in The Trove.

Note: The StoryWalk® Project was created by Anne Fergusson of Monpelier, VT and developed in collaboration with the Vermont Bicycle & Pedestrian Coalition and the Kellogg Hubbard Library.