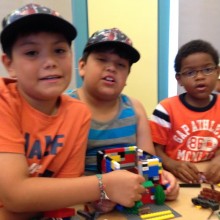 Children in The Trove’s Lego® Club built White Plains, all in Lego®! The public is invited to view the project on display at The White Plains City Hall (255 Main Street, White Plains, NY 10601) beginning November 17th and continuing through December.

It all began one day last spring when a patron came into the The Trove at The White Plains Public Library to inquire about The Trove’s Lego® Club. He had heard that the club had built a Lego® model of The New New York Bridge (the bridge that will replace the Tappan Zee Bridge) and wondered if the group would like to build the church he was affiliated with.

The idea was intriguing and, after some thought, the Club realized that this was an opportunity to feature many notable buildings in the White Plains area. In consultation with White Plains Public Library Local History Librarian Ben Himmelfarb, eighteen White Plains buildings were selected for the project. Photographs of the buildings were taken and the Lego® construction began. It continued throughout the summer and into the new school year. From the photographs, children were able to visualize and create Lego® models of the following buildings:

The Church of Saint Bernard

Our Lady of Mount Carmel Church

This project has given children the opportunity to experience all the educational benefits of playing with Lego® blocks. In addition, it has lead them to a better understanding of the history surrounding these buildings and helped them develop a greater sense of pride for the community in which they live.

The Trove’s Lego® Club meets monthly at The White Plains Public Library. Check out the Library’s online calendar for upcoming dates. Tickets are given out on a first-come, first served basis 30 minutes before the program start. Children in grades 1-6 must be present to receive a ticket.