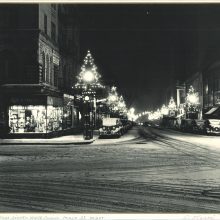 The local history blog will be taking a short break during the next two weeks, returning to weekly posting in 2017. To finish out the year, I thought it was appropriate to look at the history of winter in Westchester. While this post is by no means scientific, it will hopefully serve to help readers appreciate our climate and persuade some to venture into it!

The earliest mentions of Westchester's weather in the White Plains Collection are from the published journals of English colonists. Daniel Denton arrived in New Netherland (as New York was then called) in 1644 and was an early settler of Jamaica, in Queens County on Long Island. He introduces his account by saying he was “instigated by divers Persons in England, and elsewhere” to share what he knew of this “known unknown part of America.”

When Denton wrote his description in 1670, Europeans' knowledge of New York's climate was limited. Reports from the small settlements at Albany, Schenectady, and Kingston were meager and unreliable. Far more was understood about the weather in the New York City and Long Island area. Although Denton wished “to deal impartially” with his readers and not “feed [their] expectation” with unverified reports of “Glittering Stones, Diamonds, or Pearl,” he succumbed to the vice of many colonial writers who accentuated the positive qualities of recently claimed lands. After reading Denton's description of the climate of New York City and Long Island below, you can decide for yourself whether he was truly honest with his readers. 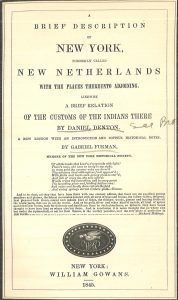 “…the Climate hath such an affinity with that of England, that it breeds ordinarily no alteration to those which remove thither; that the name of seasoning, which is common to some other Countreys hath never there been known; That I may say, and say truly, that if there be any terrestrial happiness to be had by people of all ranks, especially of an inferior rank, it must certainly be here…”

Much less is known about Charles Wolley, the author of A Two Years Journal in New York, except that he graduated from Cambridge University in July 1677 and left shortly after to serve as the chaplain for the English residents of New York until 1680. Wolley was clearly a well-educated man, and his writing about New York's climate shows his understanding of contemporary “Philosophy” (as natural science was then called), as well as his admirable willingness to report facts regardless of their impact on New York's reputation. Rather than following Denton in leaving out all mentions of winter and cold, Wolley offers an honest reaction to New York's winters and a scientific explanation of their origin. 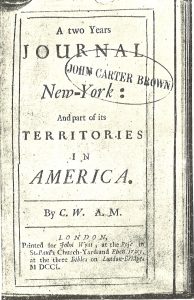 “…New-York lieth 10 Degrees more to the Southward than Old England; by which difference according to Philosophy it should be the hotter Climate, but on the contrary, to speak feelingly, I found it in the Winter Season rather colder for the most part…[New York] is adjacent to and almost encompass'd with an hilly, woody Country, full of Lakes and great Vallies, which receptacles are the Nurseries, Forges and Bellows of the Air, which they first suck in and contract, then discharge and ventilate with a fiercer dilatation. The huge lake of Canada, which lies to the northward of New-York, is supposed to be the most probable place for dispersing the cold Northwest-winds which alter the nature of this Climate, insomuch that a thick winter Coat there is commonly called a Northwestern…“

For more recent and accurate information about Westchester's weather, the White Plains Collection has copies of Jerome S. Thaler's The Westchester Weather Book (1977) and Weather History and Climate Guide to the Lower Hudson Valley (2000). In addition to collecting and republishing climatological data, Thaler writes vividly about the weather and landscape of the county. He describes Westchester as “a county with a split personality,” whose southern region is regularly warmer and less snowy than it's northern region. In his more recent book, Thaler notes that Westchester's climate will become more homogeneous as the area affected by New York City's “heat dome” grows and global climate change continues. 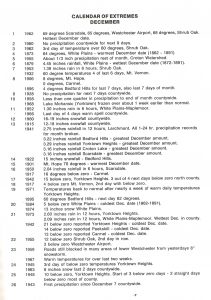 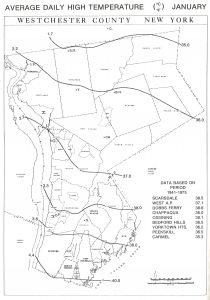 Some pages from Jerome S. Thaler's

Finally, for a more casual, local history focused look of the season, here are some wintry pictures of White Plains. The photograph in the top left and the photographs below were taken by C. Filardi and are part of the White Plains Collection. 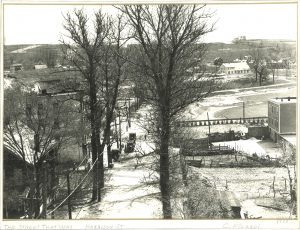 Harrison Street, 1928. Filardi titled this “The Street That Was” because an extension was laid out but not built at the time. 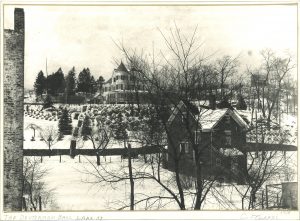 The homes of the Deuterman Brothers on Lake Street. Their large property included these homes and an ice house on Silver Lake. 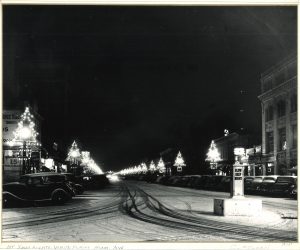 View of Mamaroneck Avenue on December 30, 1937. The photograph was taken at 11:50 PM according to Filardi's note. 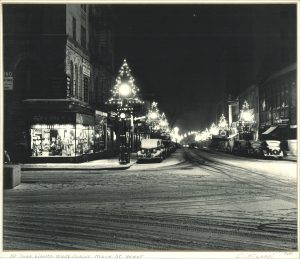