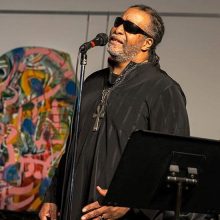 Joe Boykin is a lifetime resident of Greenburgh. He first learned music as a child from his father, who sang gospel, and on visits to his uncles in Savannah, Georgia, where music was part of every family gathering. He played college football at the University of Maryland Eastern Shore. Through contacts he made in college, he began a career in the entertainment business, working as a bodyguard to comedian Richard Pryor, and meeting singer Patti Labelle. Labelle heard him sing and gave him encouragement to continue. In 1980, he sang with the doo-wop group the Exhilarations, which did backing vocals for Bobby Womack and Millie Jackson. He has developed a close rapport with talented musicians in the Greenburgh and White Plains communities, forming an ensemble that interprets blues, jazz, R&B and related styles. Joe performed at the 2016 White Plains Jazz Fest.