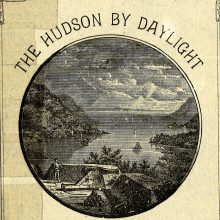 The Hudson River shapes nearly every area of our lives in some way: from topography, patterns of human settlement, and military decisions to energy production, human health, commerce, and culture. This summer, impress your fellow travelers with some knowledge about the Hudson Valley and the Hudson River gained from the White Plains Collection. Below is a bibliography of historical and contemporary titles from many different genres and eras.

The Hudson from the Wilderness to the Sea by Benson J. Lossing (1866): A wonderful, illustration-rich vintage title donated by former White Plains librarian Clara F. Hopper.

The Hudson River from Ocean to Source by Edgar M. Bacon (1902): A narrative history produced by G.P. Putnam's Sons as part of their American Waterways series. Filled with photographs and illustrations.

Hudson River Landings by Paul Wilstach (1933): A history with some nice plates and photographs.

Stories of Peekskill and the Hudson River by Carlton B. Scofield (1957): Local history by the city historian of Peekskill.

Life Along the Hudson by Allan Keller (1976): A “set of kaleidoscopic impressions of life along the Hudson from the earliest days to the present,” published by Sleepy Hollow Restorations in the year of America's bicentennial.

The Lower Reaches of the Hudson River by William F. Gekle (1982): An apparently self-published work that contains some good information and a heavy, but pleasant, dose of Gekle's passion for the river.

Chaining the Hudson: The Fight for the River in the American Revolution by Lincoln Diamant (1989): Another take on the river during the Revolutionary Period by a broadcast journalist-cum-historian.

Long Hammering: Essays on the Forging of an African American Presence in the Hudson River Valley to the Early Twentieth Century by A.J. Williams-Myers (1994): A landmark work establishing the history of African Americans in the area by the Professor Emeritus of Black Studies at the State University of New York at New Paltz.

The Hudson Through the Years by Arthur G. Adams (1996): A third edition of a history intended to bring narrative histories of the Hudson River up to date, with comparatively fewer having been written during the 20th century than during the 19th. Accessible, illustrated, and well indexed!

The Hudson, a history by Tom Lewis (2005): A narrative history that focuses on the Hudson in American culture.

An Object of Great Importance: The Hudson River during the American War for Independence by Christopher Di Pasquale (2007): Just what its title suggests, this book was written by a historian and teacher who lives in Westchester.

Revolution on the Hudson: New York City and the Hudson River Valley in the American War of Independence by George C. Daughan (2016): Recently published history written by an award-winning naval historian.

Statements Submitted to the Commission: Public Meeting at White Plains, N.Y. July 29, 1965 by the Hudson River Valley Commission of New York (1967): Just what it's title suggests, a compilation of statements by residents, elected officials, activists, and businesses.

American Sublime: Landscape and Scenery of the Lower Hudson Valley by Raymond J. O'Brien (1981): A professor of geography and environmental studies covers the industrial development, degradation, and environmental renaissance of the river.

The Mightier Hudson: The Spirited Revival of a Treasured Landscape by Roger D. Stone (2012): Tells the story of the “rebirth” of the Hudson River in the late 20th century with a focus on environmental and cultural activism.

The Catskills: An Illustrated Historical Guide with Gazetteer by Arthur G. Adams (1990): By the author of other Hudson Valley histories.

River of Mountains by Peter Lourie (1995): Record of the first trip covering the length of the river in a single vessel. Pete Seeger blurbed the book, saying “I bet this book will persuade many to rent a canoe.”

My Times in the Hudson Valley: The Insider's Guide to Historic Homes, Scenic Drives, Restaurants, Museums, Farm Produce, & Points of Interest by Harold Faber (1997): An anthology of Faber's articles from his career at The New York Times.

The Hudson Valley Book: A Complete Guide by Evelyn Kanter (2003): From a series of guidebooks “know for their comprehensive, critical coverage.”

Drifting: Two Weeks on the Hudson by Mike Freeman (2011): This travelogue of a two week canoe trip down the river is “an introspective and humorous look at both the river and Recession-Era America.”

Walking the Hudson: From the Battery to Bear Mountain by Cy A. Adler (2012): The founder and leader of Shorewalkers wrote this guide to help people “reconnect with urban wilderness.”

Hudson Valley and the Catskills by Nikki Goth Itoi (2015): A Moon travel guide with recreation information as well as places to shop, dine, and stay.

Along the Hudson with Washington Irving by Wallace Bruce (1913): A book composed of excerpts from Irving's work and interstitials written by Bruce. Intended to be read as one steamed leisurely northward on a boat.

Lighthouses and Legends of the Hudson by Ruth R. Glunt (1975): Historical and folkloric information dedicated to Glunt's husband, “who for twenty-eight years was in charge of the U.S. Coast Guard Light Attendant Station Turkey Point, Saugerties, N.Y.”

Little Chapel on the River: A Pub, a Town, and the Search for What Matters Most by Gwendolyn Bounds (2005): A journalist's account of her move to Garrison after 9/11.

A River Beckons and Paddlewheels Ply for Peoples' Pleasure, Vols. 1 & 2 by Mildred Sullivan Schlachter (2008 & 2010): A mix of oral history, poetry, and historical information by a Yonkers native. Lots of information on steamships and day liners that used to travel between New York City and Albany.

Summer Homes on the Harlem Railroad by the Central & Hudson River Railroad (1891): “Containing a description of the celebrated health and pleasure resorts and an extensive list of summer hotels and boarding houses along the line of the picturesque Harlem Railroad and connecting lines.” Contact Ben to view.

The Hudson and its Moods by Walter Glen Springer (1929): An illustrated “idyl of America's mighteist, most beautifully scenic, legendary, and historical of rivers.”

The Hudson: Scenes Remembered by The Antique Print Association (1975): Published for the bicentennial to depict “life and travel on the Hudson River during the 19th century.”

Hudson River Journey: Images from Lake Tear of the Clouds to New York Harbor by Hardie Truesdale (2003): Photographs and descriptions of natural and cultural sites.

Hudson River Valley Ruins: Forgotten Landmarks of an American Landscape by Thomas E. Rinaldi and Robert J. Yasinsac (2006): Fascinating history and photography of some buildings that are now gone, some that have been re-purposed, and some that still stand in ruins. They also have a great Instagram.

The featured image in the upper left is from the cover of The Hudson By Daylight.