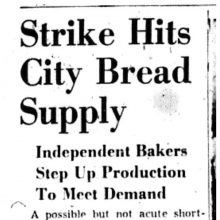 Two significant strikes affected daily life in White Plains during the 1950s. In July 1951, “a possible but not acute shortage of bread supplies” was predicted by the Reporter DIspatch due to the strike of thousands of AFL International Brotherhood of Teamsters truck drivers against 16 large companies. Those companies produced 80% of the pre-wrapped bread loaves in the New York metropolitan area. The shortage that developed over the course of the nine-day strike caused one reporter in White Plains to be reminded of “scenes of wartime shortages.” The strike began because the companies refused the union's demand for a five-day work week. The drivers worked on a salary-commission basis–meaning the more bread they delivered, the higher their salaries. During negotiations, the drivers dropped their demand for a shorter work week but wanted their commission raised from 8% of sales to 10%, along with a minimum guarantee of $75 per week rather than $65.

While teamsters and managers battled, stores in the city were only getting a “trickle of deliveries” of bread. Local, smaller bakeries were happy to fill the void and told the paper of higher sales of “cakes, cookies, stollen [fruit bread], and pastries.” One baker of Italian bread claimed that many customers driven to local shops during a previous strike and shortage had been retained even after large deliveries of bread to supermarkets resumed. Unfortunately, smaller markets and delicatessens were still “hardest hit” because larger chains relied less on deliveries from the companies whose drivers were not making deliveries. One baker found a “short bread line” outside his shop in White Plains and other sellers resorted to rationing loaves. During this strike, consumers purchased “flour, ready-mix recipes, specialty breads and even potato chips” in greater quantities. The Reporter Dispatch reported substitutes for white bread (the loaves hardest to find during the strike) were “being bought out quickly by housewives.” 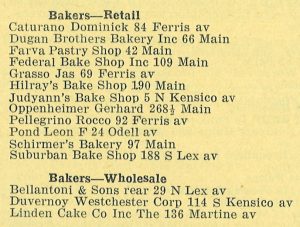 Even bakeries without striking workers claimed they were affected by the strike. Arnold Bakeries in Port Chester reported a loss of drivers who were possibly influenced or threatened by the strikers, though this was denied by the lawyer for the striking local. A driver in Queens was stopped and his truck's ignition wires were removed. The baking supplies he was carrying were “ruined.” Drivers in Manhattan and Brooklyn reported similar incidents. It is unclear whether any such direct conflicts occurred in Westchester. As the strike progressed, fewer non-union drivers crossed picket lines to make deliveries and many bakers were striking in solidarity even thought their union's demands were already met. The AFL International Brotherhood of Teamsters were eventually successful in getting a 40 hour, five day work week. They did not get the wage increase and commission boost they originally sought.

Strikes called by barbers in 1955 and 1957 were deemed worthy of the front page of the Reporter Dispatch, with daily updates for readers on the progress of negotiations and what they could expect to find in local barbershops. Journeymen of Local 816 of the International Barbers' Union struck for increases in wages from shop owners. Barbers in 1955 made $65 a week and 60% of anything over $83 a week. They were asking for $75 a week and 60% of anything over $93 a week. During the strike, there were long lines outside many of White Plains' numerous barbershops and bosses began cutting hair and shaving chins. Striking barbers rejected the owners' first offer that reduced their increases by half. Shop owners could not set their own prices under the expiring contract, and it was assumed that would be the case moving forward. Haircuts had been set at $1.25 and shaves at 75¢. The new contract called for prices to move to $1.50 and $1.00. 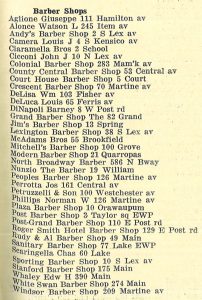 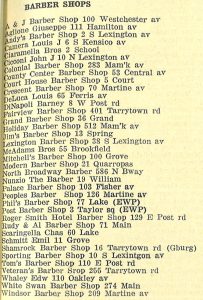 For a sense of what standard of living a barber's salary could provide in the late 1950s, consider this statement from Westchester County's “Report of the Committee on Housing” from 1957: “It was virtually impossible in 1957 in Westchester County… to produce shelter for the man with a family earning $100 per week.” Barbers in 1955 and 1957 struck to bring their weekly guaranteed salaries to just below this already subsistence level. There was an insufficient amount of housing available for low-income people in Westchester County, and what did exist was often substandard or dangerous. While it is easy to scoff at the seemingly small amounts of money at issue in the strikes, the importance of the wage increases for barbers becomes clear considered in proper economic perspective.

The 1955 strike was settled in two days with barbers getting a $10 increase in pay and customers getting an increase in the price of a haircut and a shave. In 1957, union barbers went on strike again, calling for wage increases proportional to their 1955 demands. Shop owners negotiated with the union in Union Hall at 208 Hamilton Avenue. Barbers at Jimmy's Barber Shop at 13 Spring Street broke solidarity and returned to work before negotiations were completed. Again on the second day of the strike, an agreement was reached increasing barbers' wages and prices. This time, haircuts went up to $1.75 and shaves went to $1.25. The Reporter Dispatch announced the change with an exclamation point and asked, “Comb it wet or dry?” If people still wanted the old rates, they could go to the Modern Barber Shop at 21 Quarropas Street where Al Rutigoiano and Val Tartaglia still charged the older, 25¢ lower prices.

Random thoughts: The 1955 Reporter Dispatch published “Today's Chuckle” on the front page. The same day the barbers' strike ended, the daily joke read: “If at first you don't succeed, try and try again. Then quit. There's no use being mule-headed about it.”

The featured image in the upper left is from the July 5, 1951 Reporter Dispatch.