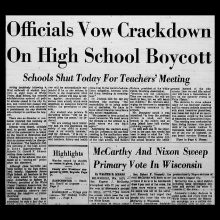 The late 1960s was a time of increasing consciousness about racial issues in the United States. The mainstream civil rights movement won victories in 1964 and 1965 with large pieces of Federal legislation like the Civil Rights Act and the Voting Rights Act. By 1968, however, because of issues like Vietnam, economic injustice, the conditions of urban life, and the nature of black identity some people questioned how much progress had really been made. The civil rights movement itself was fractured. Some advocated equality and integration within the framework of American society. Others, generally younger activists, promoted black power or black nationalism and saw little promise in continuing to fight so hard for what seemed to amount to only technical equality. After all, black Americans were still discriminated against in nearly every area of life–even in northern, supposedly progressive cities like White Plains. The following post primarily draws from contemporary newspaper articles, documents in the White Plains Collection, and, especially, High School Racial Confrontation: A Study of the White Plains, New York Student Boycott.

On March 27, the day after students first gathered on the lawn and met with administration, some black students showed up at school carrying “black power” signs. There were also white students carrying “white power” signs, but when the first bell rang, white students went to class while about 150 black students gathered on the lawn and stayed there. Student leaders met with administration again, while other students gathered in the auditorium “singing freedom songs, chanting, and making statements.” The principal, Mason A. Donaghey, addressed the student body over the public address system in the morning and said the administration would report on the progress in meeting the “legitimate student requests” in a week, on April 2nd. Principal Donaghey told the Reporter Dispatch: “We hope to lock horns with their requests and come up with results. Some were fair enough and many are attainable in the near future.” Student leaders and administration agreed to reestablish “normal standards of conduct” at the school, since classes were being skipped and the administration wanted to reestablish order. 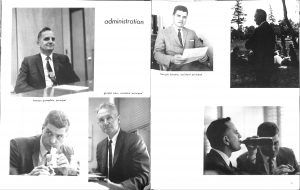 On the morning of Thursday, March 28, Principal Donaghey said, “We're in business,” and believed that things were progressing and students would return to classes. Superintendent Johnson said: “We have been trying all along to get more Negro history and culture into our courses.” The school day appears to have passed without incident or a major boycott of classes by students. That night however, Principal Donaghey met with parents at Winbrook who expressed dissatisfaction with the way the school was run. Student leaders Fox and Myers showed up at the meeting and “berated” the parents and adults for not doing enough to improve conditions at the school. The student leaders said they had to “take over the movement.” In turn, the parents and adults castigated the principal, schools, and black faculty members who were present for failing their children and community.

The same day Superintendent Johnson issued a statement to staff members. He committed to meeting the “legitimate and constructive requests of the pupils,” though he believed that this would lead to the “more constructive involvement of these students in the school program.” But he was deftly skirting the issue: the students did not want to be involved in the current school program and were explicitly seeking to alter it. A report conducted after the boycott found a holistic critique of the current order was at the root of the students' actions. “That basic issue is fundamentally racial, secondarily social class. It is: How do minority children in a status oriented, academically driven high school become educated without being made second class citizens on the one hand or else being “washed” and alienated from their group on the other?” Students were eager to discover the answer to this question, and it is in this atmosphere of unclear outcomes that school began the following week. 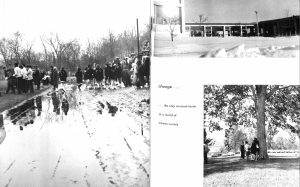 On Monday, April 1st, most students were back in class. Principal Donaghey made a statement to all students saying administration would work with the students and had already been working to meet their demands in the areas of curriculum reform, extracurricular representation, and human relations training for teachers. On April 2nd, an assembly was held to announce the administration's response to students. The Mayor, Education Board president, Editor of the Reporter Dispatch, and police (in plainclothes and stationed away from the auditorium) were all present at the school. After the breakup of the assembly, at which it was announced that not all student demands had been met and additional negotiations would take place, the most potentially dangerous events of the boycott took place.

At 1:30, Administration decided to close the school for the day because they could not control the students on the lawn. James Myers, one of the student leaders, was given a bullhorn and announced the closing to the students. A racially mixed group of 200-300 students went to the auditorium where student leaders led a peaceful discussion. They touted this peaceful assembly of students of all races as support for their call for mandatory assemblies with black history and culture topics. Donaghey resisted this student demand, saying it was too dangerous to bring together students around “controversial” topics.

That night, the entire school board and WP leaders met and decided to close schools the next day so staff could be briefed and order reestablished. Superintendent Johnson gave a “firm and unequivocal policy for reconvening school in orderly fashion Thursday morning.” Johnson declared that any student who did not attend classes would be suspended immediately. The largest boycott of students thus far also prompted the largest headline from the Daily Reporter so far on Wednesday, April 3rd. “Officials Vow Crackdown On High School Boycott” which shades toward the sensational for an article outlining the activities of a school board dealing with a non-violent boycott by young adults.

The morning of the 3rd, Superintendent Johnson addressed the concerns of the teaching staff of the entire school district at the high school. In his speech, he emphasized a reestablishment of discipline and “compliance with school regulations,” for it was their “responsibility to bring order out of confusion.” At the same meeting, Principal Donaghey said it was important “to keep the national picture in mind, and that schools in the county and on Long Island have had similar problems recently.” He also said to recognize that what happened at the high school impacted the “ultimate destiny of the whole city.” In his own way, Donaghey was in line with the people quoted in “Tell It Like It Is” articles who believed that improving the educational experience for black children in White Plains was an important part of increasing the quality of life and freedom of all black people in White Plains. 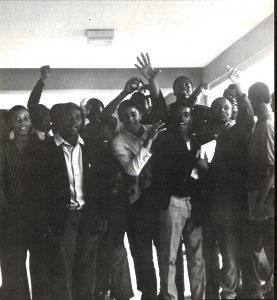 That day, administrators and three student leaders spent 6 hours in negotiations with experienced labor mediator and community member Will Dixon. In this meeting they worked out the final agreement that would end the boycott. Mr. Dixon was reported to be an instrumental part of this outcome, bridging the gap between students and the administration. Although the agreement was general in tone, it did establish an administration commitment to including “negro history and culture” into the curriculum and programs of the school. It also legitimized the student leaders' position as representatives and ambassadors of the student body. The administration committed to allowing the student leaders to meet with students and to have their implementation of the agreement monitored.

The next day, Thursday, April 4th, the agreement was announced to students at an assembly and students were then asked to return to classes. This went peacefully, with the exception of a short episode of loitering that nearly involved the police. Teachers and administrators were able to move students along and the rest of the day went normally. That evening, things changed. News of Martin Luther King's assassination reached White Plains and the high school was once again forced to forgo normal operations. Friday morning, April 5th, memorial announcements were made over the school's public address system and students were allowed to leave school for memorial services and community gatherings. School was then held the following Monday, but canceled on Tuesday, the 9th, in observance of the King funeral in Atlanta.

How the Boycott was Handled

The student actions were not a violent “race riot” and were not handled as such (when I ask WP residents about it, it sometimes gets called a riot). It was a demonstration to arouse awareness and willingness to discuss issues previously suppressed. Dodson, lead author of the school board's report, judged that the board staying out of things and letting the educators and administration deal directly with students was good for the peacefulness of the protests and calm in the community. Some believed the students should have gone through the preexisting channels to lodge their complaints. Students did not go through the student government because they felt they were “popularity contests” and their voices would not be accurately represented. Their issues were structural, and the “message” of the whole event was that a different kind of education was necessary, that is was no longer acceptable for white, academically-inclined students to receive full support while everyone else was neglected or mistreated.

Changes That Were Made 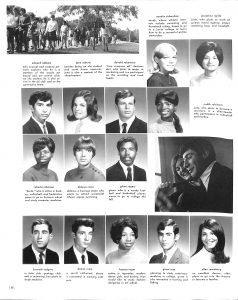 From the 1968 WPHS Yearbook–features Glenn Rogers, one of the leaders of the student action

Concrete changes resulted from the students' actions. Social studies classes were held in auditorium so student leaders could present their program to the other students. Lunchtime and evening elective seminars were held, movies from the “History of the Negro People” series were used in social studies classes, field trips to Manhattan to see black theater were taken, presentations on “Life in Africa” were held, and African American history materials were introduced in the library. Dodson concluded that curriculum changes would not have happened as quickly without demonstrations. Juniors and sophomores were identified to take over the student leadership positions the seniors graduated out of. There was some reluctance to this by white student leaders, for it was seen as the creation of a parallel structure that undermined their position. A “Talent Search” was instituted at middle school level to help black students participate in extra and co-curricular activities. Importantly, the unfair weighting of academic tracks was modified. Previously, because different tracks were weighted differently, those in non-academic tracks had no chance of being highly ranked in their class. Enrollment in humanities and social studies courses were broadened to non-academic track students as well and a social studies student curriculum advisory board was created.

This is the final part of a two-part post. The first part can be found here. The featured image is from the April 3, 1968 Reporter Dispatch.