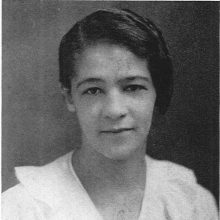 October 10 has been designated World Mental Health Day by the World Health Organization. In honor of it, here is a story about a White Plains resident whose activism on behalf of people with mental illness had a national impact.

Rosa Kittrell worked hard to redefine the way we view and treat the most vulnerable members of society. Through her tireless activism, personal struggles with mental illness, and belief in the power of education, Kittrell developed a motto: “Others, Lord, others.” Like so many black women in America, Kittrell was intersectional in her activism before anyone ever heard of that term. She recognized the ways sexism, racism, class oppression, and stigmatization of mental illness operated to prevent her from obtaining help and fulfilling her dreams. Although she was not subtle about her frustration with systemic oppression and the ignorance of individuals, she spent most of her time engaged in helping others and trying to expand the boundaries of people's compassion.

Kittrell was born in Henderson, North Carolina to James Lee and Alice Mills Kittrell. Her father was in the agricultural products business. During high school, she started working at a local YWCA and that inaugurated her interest in service to women and children. Rosa pursued graduate level education, graduating from the Hampton Institute and the Bishop Tuttle School for Social Work. Once out of school, she worked at a community center in North Carolina. It was while she was recovering from a surgery in North Carolina that she “realized that something was wrong” with her mind. She wrote a heart-wrenching account of her mental illness in the December 1943 Club Dial, published by the Woman's Club of White Plains (and available in the White Plains Collection!).

Kittrell's journey began while she was recovering from a surgery in a hospital and felt “some inner force” pushing her away from the people around her. Anti-social, negative feelings were novel to her–she was, after all, a social worker who dedicated her life to helping other people. Laying trapped in hospital bed, she felt she had “a normal self and a new abnormal self.” Her disturbing condition was exacerbated by the way people suffering with mental illness were treated in the 1930s. Her surgeon came into her room and gave her “a strong scolding” about her behavior towards nurses and refusal to eat. “Not once did he ask me why I was acting the way I was,” Kittrell reported. Isolated from family and any professionals who knew how to help her, Kittrell felt strongly that she “was no longer of any use.” 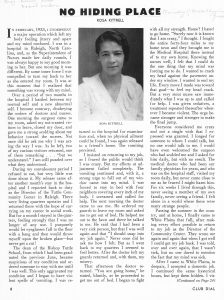 She was eventually sent home from the hospital, having completed a physical recovery from her surgery. She isolated herself at home, missed work, and started having bouts of vomiting. She returned to the hospital and was quickly dismissed because no physical ailment could be detected. Home again, she became suicidal and was re-admitted. She began having spells of violent behavior and was regularly sedated for six weeks. Of her first harrowing experiences as a psychiatric patient, she wrote, “I longed for someone to whom I could talk, but no one would talk to me… I felt alone in a world where there were many strange people.” It would be years before her feelings were validated and she was treated with respect for her well-being.

Trapped at home, unable to work, receiving comments from doctors to “snap into” normal life again, Kittrell left North Carolina and moved to White Plains. Even with her professional, educated background, Kittrell was only able to work as a domestic–a position held by many black women in Westchester at that time. In White Plains, she “continued the same hysterical hours, but kept them hidden.” She consulted a lawyer in an attempt to bring a suit against her former employers in North Carolina who shunned her after she began having psychiatric problems. Rather than pursuing the case, the lawyer suggested she see a Dr. Brennan at Grasslands Hospital. Kittrell was frustrated by the lawyer's response, but did not realize that collaboration with Dr. Brennan would change her life (and the lives of many others) for the better.

A different psychiatrist at Grasslands (not Dr. Brennan), suggested Kittrell be committed. She resisted for fear of being “branded as crazy for always.” Her fear was understandable–last time she submitted herself to psychiatric care, she was tortured and fired from her job. After a few weeks, however, she relented and voluntarily committed herself. She was placed in a “pack” and subjected to four hours of continuous baths, an antiquated and ineffectual treatment. She was sedated and given the primitive and often unhelpful medications available at the time. Again, she was “baffled, frustrated” by a system that treated people with mental illness horribly and doubled the misery of African Americans already suffering under discrimination and oppression in society at large.

A ray of light for her was Clifford Beers' seminal book A Mind That Found Itself, which told of his struggles earlier in the 20th century. Beers dedicated his life to bettering the fate of people with mental illness. Like Kittrell, Beers came to his advocacy work through personal experience, having spent time as a patient in facilities with abysmal conditions. He was the main force behind the mental hygiene movement that advocated for more humane treatment and thorough understanding of those with mental illness. Kittrell read A Mind That Found Itself and wrote to Beers for hope and direction, eventually meeting with him twice. Through a total of 21 admissions to different hospitals and Beers' influence, Kittrell developed a critical consciousness about the mental health system and became determined take action.

She felt society “hadn't learned to face mental illness, and this condition was doubly hard for a Negro.” Her diagnosis of society's ills had three parts. First, the lie “that Negroes don't go crazy” must be disproven. Second, people must fully “recognize the fact of mental illness” and accept responsibility for discovering solutions. Third, black Americans with mental illness were forced to “do battle in… an alien white world where no opportunity is given for members of his own to help him.” Kittrell's community in North Carolina was unable to help her, and she fared no better in the supposedly less-segregated north. Her drive to provide better treatment for all people, but especially black Americans, with mental illness led her, finally, to Dr. Thomas P Brennan.

It took four years for Kittrell to approach Brennan as a collaborator in her activism. She “identified him with the white race,” but was eventually won over by “his real love of all races and a sincere desire to help the mentally ill.” Together, they set up the White Plains Mental Hygiene Group, which had specific goals. The group sought to create a psychiatric hospital for black Americans attached to a “Negro medical school” and to create trainings for the enlightenment of existing psychiatric professionals. Kittrell and Brennan's campaign was extremely successful in creating a movement for change. Together, they sponsored and attended conferences in Alabama, North Carolina, Washington D.C., Oklahoma, Georgia, and West Virginia, leaving new, local mental hygiene groups in their wake. Like Johnny Appleseed but with a social conscience, Kittrell traveled to spread her progressive message that people should “look upon mental illness as they do upon physical illness,” presaging our contemporary understanding of mental illness.

In addition to putting her energy into national reform efforts, Kittrell dedicated the majority of her time in the late 1940s until her death in 1967 to social activism in White Plains. At a 1965 dinner to honor her work, international medical rights authority and Scarsdale resident Howard A. Rusk, Jr., said, “She was way ahead of her time in her foresight and knowledge of needs in the community.” Kittrell's “war on poverty” started long before Lyndon Johnson declared the eradication of poverty a national priority. 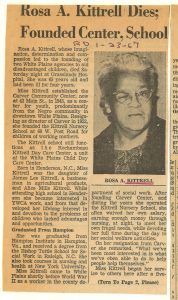 In 1945, Kittrell established the Carver Community center to serve young people in downtown White Plains. In 1952, she founded the Kittrell Nursery School for the children of working mothers. Its original location, at 60 West Post Road, was a storefront space. After the Rochambeau School was closed when the Racial Balance Plan was enacted, Kittrell merged with the White Plains Child Day Care Center in the former elementary school. Because the school served families who could not afford to pay very much for child care, it struggled financially. As Kittrell's obituary noted, her “impulsive, outgoing, total concern for the children in her care” was sometimes an impediment to garnering mainstream financial support for the school. Eventually, Kittrell was relieved of business responsibilities and able to “concentrate on the school's program,” which included prayer, food, and socialization activities. Kittrell's passionate activism “resulted in considerable trial and tribulation” in her life. Her sister, Flemmie Kittrell (Director of the Home Economics Division of Howard University), said, “One of the weaknesses of Rosa is that she is always looking around to see who in the community is poorer than she is, and trying to find out what she can do for them.”

Kittrell usually favored action over talk. She did, however, offer this when she was honored for her work by the community in 1965: “You have no idea how this makes me feel on the inside, but I give all the glory to God. Many hours we have prayed and said, ‘Lord, here is a parent who wants to do the right thing for the children but who just can't today.' Let us try awfully hard to be very real now, because we are working with human beings and we have to meet them on their level. But let us also cling close to God, for we have not experienced Him until we have done something for someone else.”

Her style of activism was defined eloquently by Prince P. Barker, a colleague in the mental hygiene movement from Tuskegee University. He described their reform efforts as the “correlated use of the social sciences as a tool for the promotion of the mental efficiency and healthful living on men and mankind.” Kittrell acknowledged that mental illness and poverty were not issues that could be improved through strictly technocratic solutions. For her, race, class, gender, faith, and the realities of everyday life all had a place in discussions of social problems. In living by her motto of “Others, Lord, others,” she acted with an authority born of experience.