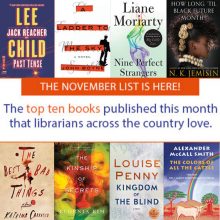 My Sister, the Serial Killer: A Novel by Oyinkan Braithwaite
Published: 11/20/2018 by Doubleday
“Nigerian nurse Korede puts up with so much from her sister Ayoola (the serial killer). Braithwaite tells a dark, lively, and funny story of how begrudgingly cleaning up after someone else’s deadly habits is just one of those things one does for family. For fans of satirical humor.”—Lisa Hoffman, Bloomfield Public Library, Bloomfield NJ

The Adults: A Novel by Caroline Hulse
Published: 11/27/2018 by Random House
“Divorced couple Claire and Matt devise a terrific idea for Christmas: spend it at Happy Forest Holiday Park with their new partners and their seven-year-old daughter Scarlett (and her imaginary friend). Hilarious and heartrending, this debut novel asks the age-old question: ‘What could possibly go wrong?'”—Todd Krueger, Baltimore County Public Library, Towson, MD

The Best Bad Things: A Novel by Katrina Carrasco

Published: 11/6/2018 by MCD/Farrar, Straus & Giroux
“Alma is a cross-dressing, bisexual, half-Mexican, badass woman who goes undercover in this historical fiction story set in 1887 Washington state. She lives life on the edge with gusto and nerve. An enjoyable ride for readers who like a fast-paced story and don’t mind graphic content.”—Joseph Jones, Cuyahoga County Public Library, Cuyahoga, OH

The Colors of All the Cattle: No. 1 Ladies’ Detective Agency by Alexander McCall Smith
Published: 11/6/2018 by Pantheon
“Each new book in this series unwraps another layer of the lives of the minor characters. Along with solving the requisite mystery, Precious delves into local politics and comes to rely more on her family and friends for their input. A charming addition to this heartwarming series.”—Fran Hegarty, Peabody Institute Library of Danvers, Danvers, MA

Empire of Sand by Tasha Suri

Published: 11/13/2018 by Orbit
“A modern take on the classic Disney tale of Mulan, this fantasy-adventure story features Mehr, a governor’s daughter who wants to make a name for herself and is passionate about saving the lives of those in her kingdom. Mehr’s unique magical powers make her a target and give the classic storyline a new twist.”—Megan Marong, Lackawanna Public Library, Lackawanna, NY

How Long ‘Til Black Future Month: Stories by N. K. Jemisin
Published: 11/27/2018 by Orbit
“This first short story collection from the most celebrated speculative fiction author of our time features her signature blend of sharply observed, provocative tales of magic steeped in realism and social commentary. Both SFF fans and adventurous readers of genre-blending literary fiction such as Station Eleven and The Underground Railroad will find much to admire.”—Annabelle Mortensen, Skokie Public Library, Skokie, IL

The Kinship of Secrets by Eugenia Kim

Published: 11/6/2018 by Houghton Mifflin Harcourt
“A sweeping, historical, family saga in which two sisters are separated during the Korean War. One is raised in the United States and the other in South Korea. For fans of Pachinko.”—Cat Ng, Palm Beach County Library System, Wellington, FL

A Ladder to the Sky: A Novel by John Boyne
Published: 11/13/2018 by Hogarth
“Enter the disturbing world of high stakes publishing and meet an author so twisted and unscrupulous you will beg for justice. For readers who like an unlikeable character and sardonic tone.”—Kimberly McGee, Lake Travis Community Library, Austin, TX

Newcomer: A Mystery by Keigo Higashino

Published: 11/20/2018 by Minotaur Books
“Newly transferred Tokyo Police Detective Kaga is assigned a baffling murder. The story is told almost entirely through the perspective of people he interviews, gradually revealing the puzzling who, how, and why in this mystery. For fans of Sherlock Holmes, Agatha Christie and Columbo as well as lovers of international crime novels.”—Julie Graham, Yakima Valley Libraries, Yakima, WA

Kingdom of the Blind: A Chief Inspector Gamache Novel by Louise Penny

Published: 11/27/2018 by Minotaur Books
“Gamache tries to understand why someone connected to a mysterious will is killed, while he and Beauvoir race against time to stop a deadly shipment of drugs from hitting the streets. Penny digs deep into her familiar characters in what may be her most personal book.”—David Singleton, Charlotte Mecklenberg Public Library, Charlotte, NC

Night of Miracles: A Novel by Elizabeth Berg
Published: 11/13/2018 by Random House
“An equally delightful follow-up to The Story of Arthur Truluv. A heartwarming tale of life in a small town with an ensemble cast of likeable characters.”—Claudia Silk, Fairfield Public Library, Fairfield, CT

Past Tense: A Jack Reacher Novel by Lee Child
Published: 11/6/2018 by Delacorte Press
“Another home run from Child. While visiting his father’s birthplace in New Hampshire, Reacher can’t help but intervene when a member of a local gang attempts to assault a waitress. He soon uncovers more suspicious happenings in the town. Fast-paced, great plot, and compelling characters.”—Laura Scott, Park Ridge Public Library, Park Ridge, IL