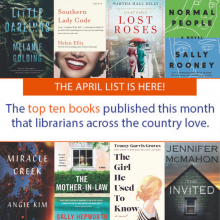 Published: 4/9/2019 by Ballantine Books
“The Ferriday family (The Lilac Girls) returns in this story of love, loss, and triumph. The voices of four compelling female characters tell of the devastating effects of the Russian Revolution and World War I. Highly recommended for book clubs and fans of Anthony Doerr, Susan Meissner, and Lauren Belfer.”—Mamie Ney, Auburn Public Library, Auburn, ME

The Girl He Used to Know by Tracey Garvis Graves
Published: 4/2/2019 by St. Martin’s Press
“A college romance with an odd, quiet girl fades when she fails to follow him to New York after graduation as promised. Ten years later, a chance meeting in Chicago reunites them. An interesting story giving insight into the world of a high functioning autistic adult. For readers who enjoyed The Rosie Project.”—Virginia Holsten, Vinton Public Library, Vinton, IA

The Invited: A Novel by Jennifer McMahon

Published: 4/30/2019 by Doubleday
“Nate and Helen leave their teaching jobs to build their dream home in rural Vermont. Helen begins seeing ghosts, and Nate becomes obsessed with a white doe. An unputdownable thriller about a house with a tragic past. Perfect for fans of Erin Kelly and Attica Locke.”—Terri Smith, Cornelia Library, Mt. Airy, GA

Little Darlings: A Novel by Melanie Golding
Published: 4/30/2019 by Crooked Lane Books
“A creepy, beautifully written story about a new mother of twin boys who claims to have seen a strange creature who wants to steal her babies. Doctors and the police are dismissive. Then the unthinkable happens. For fans of modern myths, psychological suspense, and Fiona Barton.”—Amy Verkruissen, Calcasieu Parish Public Library, Lake Charles, LA

The Mother-In-Law: A Novel by Sally Hepworth
Published: 4/23/2019 by St. Martin’s Press
“Lucy hopes to have a good relationship with her husband Ollie’s mother, but Diana makes it difficult. When Diana is found dead of an apparent suicide, Lucy reexamines everything she knows about Diana and the rest of the family. For fans of The Perfect Couple by Elin Hilderbrand and The Lake House by Kate Morton.”—Chris Markley, Kingsport Public Library, Kingsport, TN

Published: 4/16/2019 by Hogarth
“Follows the complicated relationship between Connell, a popular boy, and Marianne, a lonely and private girl, through their high school years and college. A great book club pick. For fans of Three Junes by Julia Glass and Idaho by Emily Ruskovich.”—Anbolyn Potter, Chandler Public Library, Chandler, AZ

Save Me the Plums: My Gourmet Memoir by Ruth Reichl
Published: 4/2/2019 by Random House
“Reichl’s captivating story about leaving her job as a New York Times restaurant critic to become Editor in Chief of Gourmet magazine. Her writing is as luscious as the food she critiques. For fans of Kitchen Confidential by Anthony Bourdain and My Life in France by Julia Child.”—Katelyn Boyer, Fergus Falls Public Library, Fergus Falls, MN

Published: 4/16/2019 by Doubleday
“A funny, spot-on collection of essays on topics ranging from marriage and manners, three-ways, and how to be a good friend in the middle of a murder trial. For fans of You Play the Girl by Carina Chocano and Thick by Tressie McMillan Cottom.”—Linda Quinn, Fairfield Public Library, Fairfield, CT

Women Talking by Miriam Toews
Published: 4/2/2019 by Bloomsbury
“In a modern-day Mennonite community, eight women surreptitiously gather in a barn to decide their future after learning the truth behind two years of sexual assaults committed by neighbors and family members. Their circuitous, swooping two-day conversation touches on faith, autonomy, duty, anger, and their hopes for their lives and those of their children in this compelling and haunting read. For fans of Lauren Groff.”—Andrea Gough, The Seattle Public Library, Seattle, WA