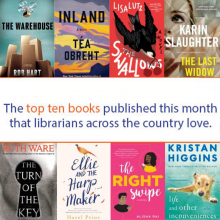 Here are the top ten books published in August that librarians across the country love. Just click on a title or book cover to place it on hold.

The Right Swipe by Alisha Rai

Published: 8/6/2019 by Avon
“An intelligent, multicultural contemporary romance. Rhi, CEO of the Crush dating app, and Samson, NFL star, embark on a joint project that turns into more than just talk. Issues of #MeToo in the tech industry and the NFL’s concussion problem are woven in. For readers of the Forbidden Heart series, Elle Wright, and Alyssa Cole.”—Jessica Werner, The Seattle Public Library, Seattle, WA

Ellie and the Harpmaker by Hazel Prior
Published: 8/6/2019 by Berkley
“When Ellie walks into the Harp Barn, her life is bound to change. Dan the harpmaker is a sensitive soul who gives Ellie a harp. Ellie’s husband Clive thinks the gift is inappropriate and doesn’t support her desire to play, so she takes lessons behind his back. An engaging and tender book for fans of Fredrik Backman and Graeme Simsion.”—Kathleen Harriott, Punta Gorda Public Library, Punta Gorda, FL

Published: 8/13/2019 by Random House
“Obreht lays a mythical voice over an already dreamlike landscape of drought in Arizona. A mother and half-grown sons generate a powerful dynamic not often explored, and the youngest, who knows about scary beasts, brings magic and intuition. A journey into a barren world, inside and out. For fans of Larry Watson and Alice Hoffman.”—Katherine Phenix, Rangeview Library District, Adams County, CO

The Last Widow by Karin Slaughter
Published: 8/20/2019 by William Morrow
“A fast-paced thriller in the Will Trent series has Will and Sara trying to prevent a deadly epidemic. The book tells the story of what is happening to three different people during the same short time periods, as they are unaware of the actions of the others. For readers who enjoy Tana French and John Sanford.”—Susanne Guide, Union County Public Library, Liberty, IN

Life and Other Inconveniences by Kristan Higgins

Published: 8/6/2019 by Berkley
“Explores the complex relationships between caregivers and their children, as four generations of one family reflect on their past, and the failing health of the family matriarch looms large. For readers who like fully developed characters with real-world problems, and fans of Jennifer Weiner and Susan Elizabeth Phillips.”—Amanda Kowalcze, Green Hills Public Library District, Palos Hills, IL

Sapphire Flames: A Hidden Legacy Novel by Ilona Andrews
Published: 8/27/2019 by Avon
“The fifth Hidden Legacy paranormal adventure requires middle sister Catalina, now head of House Baylor, to use all her skills and poise to make the right decisions for herself and her family. For fans of Nalini Singh’s Psy/Changeling series and Patricia Briggs’ Moon Called.”—Lynne Welch, Herrick Memorial Library, Wellington, OH

The Swallows by Lisa Lutz

Published: 8/13/2019 by Ballantine Books
“A dark, satirical book that centers around a school and the revenge that we seek in times of humiliation. It’s a twisty read that will have you following an investigation filled with secrets, lies, and threats. For readers who liked Prep by Curtis Sittenfeld and Small Admissions by Amy Poeppel.”—Kathryn Neal, Skiatook Library, Skiatook, OK

Things You Save in a Fire by Katherine Center
Published: 8/13/2019 by St. Martin’s Press
“A traumatic event as a young woman has left firefighter Cassie with a hard shell which breaks apart as she learns about forgiveness, love, and friendship. With gripping firefighting scenes and a love story, this is perfect for fans of Jo Jo Moyes or Marissa de los Santos.”—Alissa Williams, Morton Public Library, Morton, IL

The Warehouse by Rob Hart

Published: 8/20/2019 by Crown
“Paxton and Zinnia are new employees at Cloud where they work, live, and have their productivity and location tracked through their smartwatches. Gibson is the dying industrialist who created the Cloud company and is touring the country visiting his facilities. This near-future dystopian sci-fi thriller made me leery of ever shopping online again. For fans of The Circle by Dave Eggers and Notes from the Internet Apocalypse by Wayne Gladstone.”—Dan Brooks, Wake County Public Library, Raleigh, NC

The Whisper Man by Alex North
Published: 8/20/2019 by Celadon Books
“Tom and his son Jake move to Featherbank to rebuild their life after the death of Tom’s wife; unknown to them, the town has a dark history and another little boy has gone missing and Jake begins to hear whispers in his new house. For fans of Joe Hill and Paul Tremblay.”—Jennifer Winberry, Hunterdon County Library, Flemington, NJ

The Perfect Wife by JP Delaney

Published: 8/6/2019 by Ballantine Books
“Abbie wakes up with no memory of how she ended up in the hospital. Her tech wizard husband tells her that after a horrific accident, he spent five years trying to bring her back. But is Abby’s return a miracle of science, or a nightmare? Delaney’s latest psychological thriller keeps you guessing.”—Joan Meis Wilson, Needles Public Library, Needles, CA

The Turn of the Key by Ruth Ware
Published: 8/6/2019 by Gallery/Scout Press
“Rowan travels to northern Scotland to nanny for a rich, eccentric family; a seemingly perfect job until everything unravels. The isolated location, creepy gothic vibe, unreliable narrator, and brilliant twists keep readers on edge from start to finish in a pulse-pounding read.”—Cyndi Larsen, Avon Free Public Library, Avon, CT