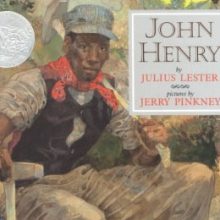 The African American tradition of storytelling helps bring together collective experiences and wisdom through well-known characters and stories as in the ones selected here. Enjoy these stories of hope, humor, kindness, cleverness, and more.

Jump! The Adventures of Brer Rabbit, by Joel Chandler Harris

“The folktales collected by Harris from former slaves at the end-of-the-century constitute a valuable contribution to African American folklore. The illustrations, full-page portraits of the character and their antics, are in pen-and-ink and watercolors. They match the text in humor and vigor.”—School Library Journal

The Headless Haunt and Other African-American Ghost Stories, by James Haskins
“A collection of African-American ghost stories made unique by the inclusion of personal ghostly experiences recorded in interviews with former slaves conducted by the WPA Georgia Writers’ Project in the 1930s.”—Horn Book

The People Could Fly: American Black Folktales, by Virginia Hamilton

Sure as Sunrise: Stories of Bruh Rabbit and His Walkin’ Talkin’ Friends, by Alice McGill
“Following an excellent two-page introduction about Bruh Rabbit and her experiences with them, McGill presents five entertaining tales. She begins and ends each story with a few comments, including where and from whom she first heard it, musings about its moral, and a personal anecdote or two. Done in acrylic paint on textured paper, the mostly full page illustrations are filled with vivid colors and details.”—School Library Journal

“Based on several well-known versions of an African American folk ballad, Lester’s tale is true to the essence of the steel-driving man; yet, it allows room for touches of whimsy and even includes some contemporary references that tie the hero to our own times. Told with just a trace of dialect, the story moves along briskly toward the climax. Its moral message of the importance of a well-lived life is clearly stated, and the ending is uplifting.”—School Library Journal