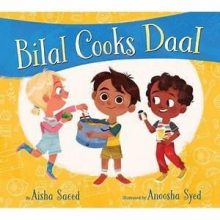 This blog is the first in a two-part series about food-themed picture book eBooks available on OverDrive and on Libby. What is Libby? Libby is an easy-to-use app that allows you to borrow eBooks and digital audiobooks with your library card for free. Libby has thousands of adult, teen, and children’s titles that you can borrow using your iPad, tablet, or phone by downloading the app from your app store. Picture book eBooks are a great way for parents and caregivers to read-aloud beautifully written and illustrated stories with their pre-readers and beginning readers and they work really well to share on iPad or tablets at home. The focus of this series is to highlight eBooks that showcase the stories of foods from different traditions, and how they bring together family and friends.

To get you started on cooking up a storm with your kids, in addition to the books, I also really liked this site from the American Academy of Pediatrics for its healthy recipes for children and this news from Delish.com which is offering free virtual cooking classes on Instagram. 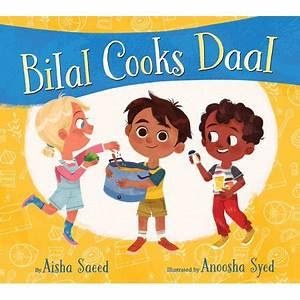 Bilal Cooks Daal
By Aisha Saeed & Anoosha Syed
*An American Library Association Asian/Pacific American Award for Literature 2019 Honor Book
Young Bilal is excited to help his dad make his favorite food – daal – and share it with all of his friends. Everyone pitches in to help make it and, of course, eat it – yum! In her author’s note, Aisha Saeed explains that daal is a staple food in much of South Asia including Pakistan where Bilal’s grandparents immigrated to the U.S. from. The author includes the recipe for chana daal – the variety of daal cooked in her story. There are many varieties of daal lentils and I’ve included here one recipe and cooking tutorial for a masoor dal curry recipe (cooking time less than 30 minutes) from AnitaCooks on YouTube: 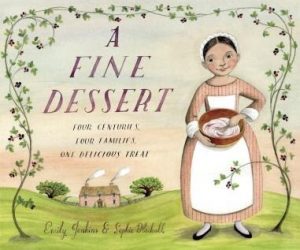 By Emily Jenkins & Sophie Blackall
*A New York Times Best Illustrated Book
Writer Emily Jenkins tells the story of four families, in four different cities and in four different time periods making the same dessert known as blackberry fool. The author’s and illustrator’s notes at the end of the story discuss the fascinating research and detail that went into creating the book. Particularly interesting to me was the author’s insightful discussion of including a slave family into the historical narrative. The book includes a recipe for blackberry fool, and I found this YouTube video on making blackberry fool from the Frugal Chef: