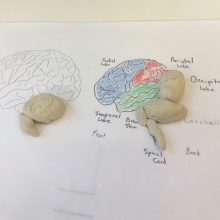 Celebrated each year on May 11, Twilight Zone Day is a fun way to enter a dimension where dolls protect those they love, aliens can be deceiving, and a man who loves to read never has any time to do so.

The Twilight Zone was created, written, and narrated by Rod Sterling. The show premiered on October 1, 1959, and ended its run in 1964. Watching a marathon of The Twilight Zone has become a New Year’s Eve tradition for many fans; however, this wacky, and wonderful show can be viewed and enjoyed at any time of the year. The Twilight Zone is strange, witty, and often very dark.

One of the main reasons that The Twilight Zone has been such a phenomenal success is that the show often uses an element of surprise. Once you have entered this dimension there is no turning back. Episode endings are often shocking or frightening: a character has an epiphany, a life changing realization occurs, or an unexpected twist happens leaving the audience in shock. For specific recommendations, check out Rolling Stone’s list of the top 25 Twilight Zone episodes. Some of my favorites include “Living Doll,” “Eye of the Beholder,” and “Time Enough at Last.”

To celebrate Twilight Zone Day I will recommend a list that highlights some weird, creepy books, eBooks, audiobooks and DVDs.

“The lifelong friendship of Zach, Poppy and Alice revolves around their joint creation, an epic role-playing saga of pirates and perils, queens and quests. But now they are 12, and their interests are changing along with their bodies; when Zach’s father trashes his action figures and commands him to “grow up,” Zach abruptly quits the game. Poppy begs him to join her and Alice on one last adventure: a road trip to bring peace to the ghost possessing her antique porcelain doll. As they travel by bus and boat (with a fateful stop at a public library), the ghost seems to take charge of their journey—and the distinctions between fantasy and reality, between play and obligation, begin to dissolve….” –Kirkus Reviews 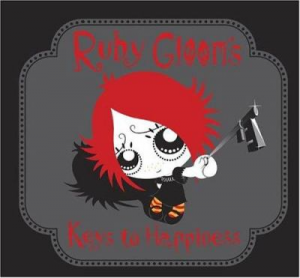 If Wednesday Addams ever wrote a book, it would be similar to Ruby Gloom’s Keys to Happiness. Meet Ruby; she has a lot of wisdom and advice to share with her young readers. You shouldn’t believe everything you hear, especially from ghosts, who can be so dramatic. Also, make sure to keep your heart in a box so it won’t get broken. If you have kids who love creepy crawlies or are in the mood for something fun and a bit quirky, this is a wonderful book to read. Fans of Neil Gaiman will enjoy Ruby’s realm: two-headed dolls, skeletons that dance without their heads, food that you can play with, and a pet bat. Wonderfully wicked and delightful for all ages. 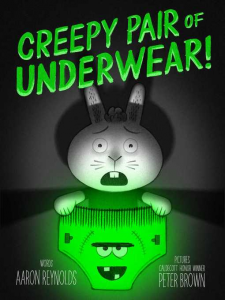 If creepy carrots weren't terrifying enough now there is a creepy pair of underwear! From the team who created Creepy Carrots comes another strange tale. Jasper is all grown up and isn’t afraid of the dark…but why is his underwear glowing? Is it something ghoulish… or is Jasper still a little bunny who is scared of everything? If his underwear is creepy then Jasper can try to get rid of them before they get rid of him. A fun book for anyone who enjoys zany zombies, creepy carrots, and dire dimensions!

This DVD is a collection of nineteen episodes, including “The Monsters are Due on Maple Street,” one of my very favorites from the first season. The episode starts out with a neighborhood coming together to find out why the power is out, why lights are flickering off and on, and if someone in the neighborhood is causing mayhem. If you have never seen The Twilight Zone, I highly recommend watching the fan favorites. 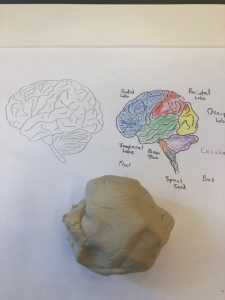 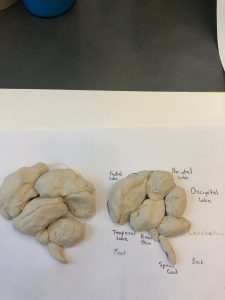 If you have a child that loves anatomy (the study of structures of living things) or neurology (the study of brains,) is curious about dissection, or just loves to play with clay, this might be a fun STEAM activity to try at home. I was able to modify this brain surgery experiment using a few items:

First, lay out a piece of newspaper: this experiment might be a little messy. Next, ask your child what they know about the brain. This can be a wonderful time to explore the KWL chart, which helps you gauge your child’s learning from the activity. You and your child can go over some brain vocabulary words, such as frontal lobe, spinal cord, and brain stem. After you familiarize yourself with the parts of the brain, help your child draw or trace a picture of the brain on your paper (you can use this coloring sheet as a guide.) Next, mold and shape the clay into different parts of the brain, placing each piece in the correct spot on your brain diagram. If you have colorful clay, you can try color-coding different areas.