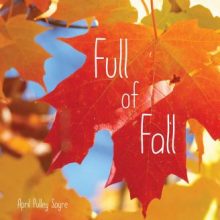 September will be here soon and we are starting our fall with an autumn StoryWalk. Take a stroll on the Library Plaza and along your way enjoy the book, Full of Fall written by April Pulley Sayre. Full of Fall is a visually stunning picture book that captures the essence of Fall. Readers will learn that when the September sun is low in the sky it is time to say goodbye to summer.

In the next few pages, we learn about the leaves, and how the colors surge. First, readers meet Autumn as the shapes and colors of trees emerge: auburn, rustic gold, and red. As the readers turn the page, they will greet yellow and embrace the boldness of red. Next, we sway under a canopy of a huge tree: gold and green frame trunks, light and dark. Through the pages of spectacular photography, ducks create ripples in the water, and berries burst with color. Soon a leafy lane appears as the twigs let go and we watch as leaves slip and spin onto the ground.

The wind sweeps the leaves below, they dry and the edges of the leaves curl. The journey of the leaves continues: they float, sink, and swirl as the forest glows under the bright sun. Before winter arrives, the leaves fade into brown and decompose. Soon we will say goodbye to the leaf show as the trees and the wilderness prepare for winter and the falling snow softens underneath the moon.

Full of Fall is vivid in its portrayal of autumn and nature. Each page turns to another magnificent color. On one page a squirrel greets us as it is stuffing its mouth. Even as the leaves decompose, we can’t help but admire the beauty, elegance and colorful pictures. Also, the way the story is presented is poetic and simple; it is almost like a haiku. At the end of the book there is a page titled Look Closer: Leaves. This page describes the definitions of margins, midribs and sunlit veins. Readers will be able to identify the thickened central vein called a midrib. We also learn that xylem carries water and nutrients to the leaf, while phloem carries sugars made by the leaf back to the rest of the plant. Whether a patron is doing a lesson on seasons or simply wants their child to learn about autumn, Full of Fall (Library Catalog, Libby) is a great book that teaches children about leaves. Furthermore, Full of Fall would also make a great book for a STEAM collection.

Below you will find additional fall stories:

“Glowing new illustrations featuring a multiracial cast of children adorn this classic ‘Let’s Read and Find Out Science' primer, first published in 1960. Using plain language and short sentences, Bulla follows an apple tree from seed to maturity, introducing readers to leaves, flowers, branches, roots, and fruits—all of which are depicted in thickly brushed but recognizable detail in Schuett’s (Night Lights, 2000, etc.) outdoorsy scenes. It’s a staid but still useful introduction, and budding botanists will ‘Find Out' more from the two experiments and a short reading list at the end.”–Kirkus Review 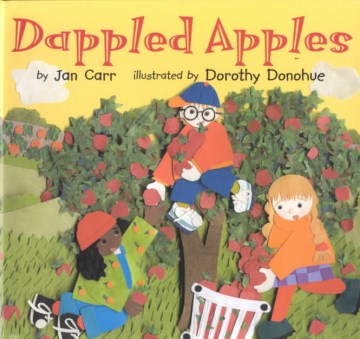 “The sweet-sour bite of the first fall apple; the crunching sound of the red and orange leaves; and the spooky ghosts of Halloween all come alive in this frisky celebration of autumn. As the children carve pumpkins: ‘Teeth are zigzag / Tail goes wigwag / Seeds are slimy / Scoop the goop.’ These lyrical verses with simple rhymes make this a perfect choice for a quick read-aloud. The cut-paper collage illustrations make the crisp leaves seem like they could be scooped up by the handful. The rope tie on the scarecrow and the fluffy tissue paper clouds seem to pop right off the page. Reading it during the summer might make children yearn for the first signs of falling leaves.” –Kirkus Review 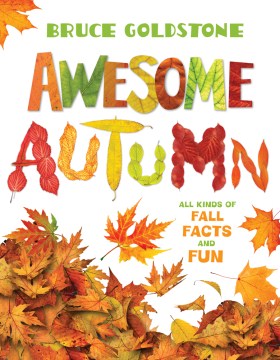 “Goldstone (100 Ways to Celebrate 100 Days) delivers a thorough overview of the season of autumn and what it entails in terms of the environment and weather, plants and animals, and human traditions and experiences. A chunky, informal font announces what each page is about (‘Leaves change color. Why do leaves change?’), with detailed information unspooling in a smaller typeface (‘As days get shorter, leaves stop producing chlorophyll. The trees don’t need it anymore’). Photographs of fall trees, animals, clothing, and activities appear throughout, often appearing within leaf-shaped silhouettes. Several spreads dedicated to hearing, taste, and touch encourage kids to actively embrace the season with all their senses, and a list of fall activities carries that idea through to the end. With an appealing layout that lends itself equally well to browsing or curriculum support, this lively book would be an excellent addition.” –Publishers Weekly 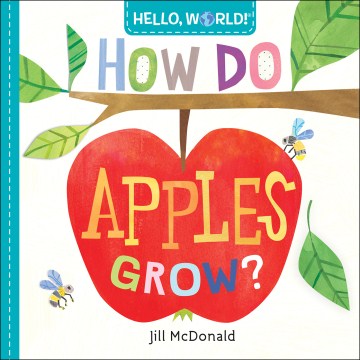 “Simple factual information is delivered on sturdy board pages about a topic popular in most early-childhood curricula. One or two short sentences per page simply outline the process of growing apples: planting the seed, tending the seedling, nurturing the sapling, blossoming, pollination, harvest, and beyond. Proper scientific terms label illustrations of a cut apple and blossom. A series of numbered pictures show how a blossom becomes fruit. An added fact in a smaller font (‘It takes two to three years for a seed to become a sapling’) on each spread extends the usefulness of the book beyond the board-book audience. Some of the cheery illustrations may elicit more questions than can be answered by the text, however. There is no explanation as to why two children are staking the sapling, for instance. The children depicted are a multiracial mix, and several appear in more than one picture. All are included in the apple-picking scene, but that is not the end of the book. The next spreads show a truck being loaded to deliver apples to market, then children at a table eating foods made from apples, and finally an apple tree in all its stages with the adage ‘Good things are worth waiting for!’ Useful when apple trees bloom and again during apple-picking season.” –Kirkus Reviews 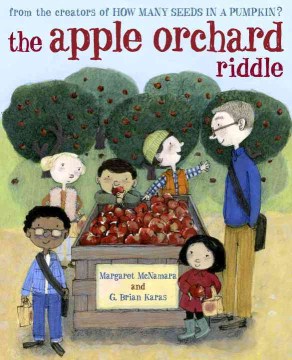 “Mr. Tiffin and his class from How Many Seeds in a Pumpkin? (Random, 2007) head out on a field trip. As the students tour Farmer Hills's orchard, they are introduced to many varieties of apples, get a chance to pick some, and watch how cider is made. Mr. Tiffin also gives them a special assignment: ‘Show me a little red house with no windows and no door, but with a star inside.’ The children offer many guesses, but it is Tara, the daydreamer among them, who solves the riddle while thoughtfully munching on an apple core. Karas's detailed pencil and acrylic illustrations show the youngsters engaged in lots of hands-on learning, from examining an old tractor to recording their observations in a notebook. A page of apple facts is included. This engaging story will spark fruitful curriculum discussion.”–School Library Journal 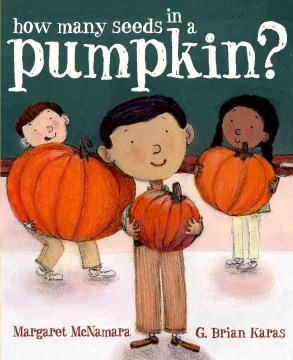 How Many Seeds in a Pumpkin? by Margaret MnNamara and G. Brian Karas
(Grades K-4)
Library Catalog
Libby

“Charlie, the smallest kid in class, hates lining up by size. One day, his teacher brings three pumpkins to school small, medium, and large and asks the children to guess which one contains the most seeds. After a round of guessing, they open them up and dig in to find out. This messy job yields a surprising answer that leaves Charlie saying, ‘Small things can have a lot going on inside them.’ Karas's characteristic watercolor illustrations done in a fall palette depict a diverse, modern classroom full of warm and humorous details. Spreads of the seeds sorted by twos, fives, and tens encourage readers to count along with the students. Intriguing facts about pumpkins, including how to tell which yield the most seeds, conclude the book. This enjoyable story, sprinkled with math and science lessons, should be a first-purchase consideration.”–School Library Journal 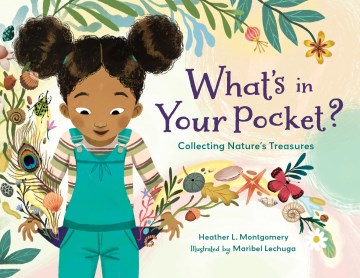 “This cleverly conceived and appealingly executed title addresses young readers directly, connecting their noticing and collecting habits to those of others who continued to observe, collect, and organize in adulthood. Montgomery introduces a grandly diverse array of nine naturalists, researchers, and explorers from Maria Sibylla Merian, who studied butterflies in the 17th century, to Bonnie Lei, whose present-day research focuses on sea-life conservation. Three are people of color, and the majority are female. The young George Washington Carver collected seed pods; deep-sea explorer William Beebe collected birds’ eggs; and young Jane Goodall put worms under her pillow! Other profiles include Charles Darwin, tree-canopy explorer Margaret Lowman, herpetologist Diego Cisneros-Heredia, and fossil hunter Mary Anning. The vignettes from childhood are engaging, well paced, and smoothly told. Short introductions to the adult scientists follow, in a smaller font. In her author’s note, the writer introduces the concept of naturalist intelligence. Lechuga’s friendly illustrations feature the brown-skinned girl with Afro puffs and overflowing pockets shown on the cover as well as the scientists as children, then as adults, in appropriate times and places. The backmatter includes more about the grown-up scientists and the author’s own sensible ‘rules for collecting,’ which involve respect for nature, the people she lives with, and herself (safety). The illustrator reminds readers that habits of observation are something she also shares with scientists. Inspiration for nature-loving children.” –Kirkus Reviews

“Ideas plus action yield big rewards is the premise of this debut picture book, written by the founder and executive director of Harlem Grown, a New York City community garden collective. The text offers a historical account of the origins of Hillery's organization and an inspirational story about working together to meet a community need. Acclaimed illustrator Hartland (Ada Lovelace, Poet of Science) features characters of various ages and ethnicities. Led by Mr. Tony (and inspired by a little girl named Nevaeh), the community members clean an empty lot, prepare the land, and plant fruits and vegetables. The whimsical illustrations, framed by a palette of muted and lush greens and complementary colors, perfectly capture the book's theme of growth and collaboration. Instructions for starting a garden anywhere and additional resources for children and their families are included. VERDICT A wonderful addition to picture book collections in school and public libraries” –School Library Journal