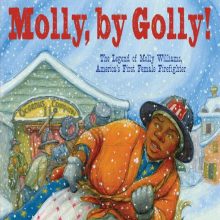 Stroll through the Gallery on the second floor of the Library, and follow the story of Molly Williams, the slave who became America’s first female firefighter! The Black History StoryWalk is based on the book, Molly, By Golly!: The Legend of Molly Williams, America’s First Female Firefighter by Dianne Ochiltree and Kathleen Kemly. In the book, New York City's Fire Company Number 11 is in trouble. A deadly snowstorm is blowing, and many of the volunteers are sick in bed. When the fire alarm sounds, who will answer the call? Who will save the neighborhood? Molly Williams, the company's cook, for one! Clapping a weathered leather helmet on her head, strapping spatterdashes over her woolen leggings, and pulling on heavy work gloves –it's Molly, by golly, to the rescue! Young readers will enjoy plucky Molly Williams's legendary adventure as they learn how fires were fought in the early 1800s.

Because Claudette by Tracey Baptiste & Tonya Engel
Library Catalog
Libby
“On March 2, 1955, 15-year-old Claudette Colvin refused to give her bus seat to a white person, nine months before Rosa Parks's famous act of civil disobedience. Parks befriended the young woman and encouraged her to get involved with the NAACP youth division. The author frames the narrative with the ‘Because’ construct, showing how the civil rights movement was a series of acts of civil disobedience, all part of a larger movement to abolish segregation. Baptiste successfully demonstrates how the decision made by one young person reverberated through history. Cameos by Martin Luther King, Jr. and less-widely celebrated Aurelia Browder, Susie McDonald, and Mary Louise Smith reinforce how it was the collective work of many unsung people that led to victory in civil rights efforts. Engle's illustrations, rendered in acrylic underpainting and oils on textured vellum paper, are stunning. These exude a sense of warmth and unity. Especially powerful is a spread in which Colvin is understanding her place in history as one of many strong women who have ‘caused trouble’ in the name of freedom. In the author's note, Baptiste explains how she was inspired to write this riveting picture book biography when she heard Fred Gray, civil rights attorney and Colvin's lawyer, say that the Montgomery bus boycott wouldn't have happened if it weren't for the teen's influence. Back matter includes materials for further reading. VERDICT A gorgeous tribute to a young Black activist that will inspire many readers. Add this to all picture book biography shelves. Luminous.” –School Library Journal

Curve & Flow: The Elegant Vision of L.A. Architect Paul R. Williams by Andrea J. Loney & Keith Mallett
Library Catalog
Libby
“A portrait of an African American architect who ‘curved his creativity around the stone wall of racism.’ The title reflects the course of Williams' career more than his characteristic rectilinear style, but the creators of Take a Picture of Me, James Vanderzee! (2017) again pair a narrative alive with rhythm and rich imagery to equally vibrant pictures to celebrate both the achievements and the character of a (this time) literally groundbreaking Black figure. Writing in present tense for immediacy, Loney gives her subject youthful dreams of building a home that lead him to bend around naysayers and racial prejudice to establish himself as an architect–learning to sketch ideas upside down on the fly to impress White clients across the table, to create structures with a Southern California flair ‘from paper to pine to paint job,’ and then ‘flow[ing] in a different direction’ to help found a bank that would lend to Black communities in South LA. Mallett follows Williams from childhood to dignified maturity, catching the overall motif with curving lines, restrained lighting, and slightly softened focus while portraying him here bent over blueprints with glimpses of his work visible over his shoulder, there standing proud with his family before the house he did at last design and build, and, in a final scene, posing with a racially diverse group of smiling Angelenos. Along with a timeline and a select list of sources, the backmatter includes photos of several of the thousands of structures with which he is associated… An inspiring tribute to a determined dreamer and doer constructed with admirable verve.” –Kirkus Reviews

Because of You, John Lewis: The True Story of a Remarkable Friendship by Andrea Davis Pinkney & Keith Henry Brown
Library Catalog
Libby
“A picture-book biography in verse highlighting the friendship between John Lewis and the young African American boy whom he inspired. In her signature expressive and soulful style, Pinkney introduces readers to young Tybre Faw, a boy from Tennessee who learns about Sen. Lewis from reading books. Inspired by Lewis' lifelong fight for justice and equal rights, Tybre convinces his grandparents to make a 4-hour drive from their home in Tennessee to Selma, Alabama, where every year Lewis conducts an annual pilgrimage across the Edmund Pettus Bridge in honor of his historic showdown, which helped usher in the Voting Rights Act. There, the two meet and a friendship is sparked. Woven into the narrative is the story of how Lewis, inspired by Dr. Martin Luther King Jr., went on to become a civil rights hero. With deep emotion, Pinkney captures the generational struggle for freedom and takes readers from Dr. King's radio speeches during the Jim Crow era to the Black Lives Matter movement of today. Brown's watercolor-and-quill pen illustrations are striking and larger than life, adding great depth and meaning to the verse. Backmatter includes a statement further describing the relationship between Lewis and Tybre, a timeline of Lewis' life, captioned photographs, and the poem “Invictus” by William Ernest Henley, which Tybre delivered at Lewis' funeral service… This eloquent tribute is a must-read.” –Kirkus Reviews

Stacey Abrams and the Fight to Vote by Traci N. Todd & Laura Freeman
Library Catalog
“What would Stacey Abrams' Black political female predecessors say to her if they were alive today? Todd and Freeman bring this scenario to life in their creative biography of Georgia-based politician Abrams. Voting rights champions across two centuries–Sojourner Truth, Ida B. Wells, Septima Poinsette Clark, and Fannie Lou Hamer–speak to one another about Abrams as they reflect on the barriers that national and state governments have systematically erected to prevent specific populations from voting. While the text focuses on the Black vote, the backmatter describes many other groups that have been excluded from voting throughout American history. This biography begins with Abrams' parents, who also, growing up in the Jim Crow South, faced obstacles that required courage and tenacity to overcome. Abrams' parents taught their children to take care of one another and took them to the polls every election to show them that voting was how to take care of your community. The daughter of a librarian, Stacey loved books and using ‘big, juicy words.’ As the book traces Abrams' successes at Spelman College and her political accomplishments, the brightly colored digitally rendered illustrations, featuring striking portraits of Abrams and others that fill the page, emphasize her determination despite disappointments, and the more faded images of her political predecessors remind readers that they speak from the past… A brilliant introduction to a powerful Black female politician and voting rights activist.” –Kirkus Reviews

Maya’s Song by Renée Watson & Bryan Collier
Library Catalog
“A loving tribute in free verse to a writer who found her home, and herself, in her words. ‘Once you start speaking again, / ain't nobody gonna be able to shut you up.’ Filling out a biographical framework that begins in 1928 with the birth of Marguerite Annie Johnson into a loving family and ends in 1993 with her reading at President Bill Clinton's first inauguration, Watson chronicles poet Maya Angelou's travels from St. Louis to California, Ghana to Harlem and links with friends like ‘Jimmy’ Baldwin, as well as the way she gathered ‘word-seeds’ even through the years of silence after ‘her mother's boyfriend / hurt her body, hurt her soul.’ In his painted collages, Collier alludes to that silence with a broad, striped ribbon across closed lips in the course of portraying his subject with the same look of dignified reserve throughout her growth from infancy to adulthood. Using a slowly brightening palette, he surrounds her throughout with similarly brown faces until closing with a final bright, smiling solo close-up: ‘No holding her head down, no hiding. No more silence. / She didn't have the pitch-perfect voice others had, / but she had her songs, her stories.’ In their notes, Watson and Collier both speak to the inspirational power of Angelou's persistence and courage… A soaring portrait of a “Black girl whose voice / chased away darkness, ushered in light.”  –Kirkus Reviews

The Faith of Elijah Cummings: The North Star of Equal Justice by Carole Boston Weatherford & Laura Freeman
Library Catalog
Libby
“Though he was told that he would never be able to read and write well, Elijah Cummings defied his naysayers to become an honored figure in American politics and an especial champion for children and education. In this picture-book biography, readers learn that Elijah Cummings was one of seven children born to his parents, Ruth and Robert Cummings. The Cummings left the racist South and settled in Baltimore, Maryland, where Cummings would spend the rest of his life. The book follows Cummings from his childhood, when he first realized he wanted to study and practice law, through his acceptance and graduation from Howard University and his political career in Maryland and as a congressman, to his death. Readers come away with many facts about and direct quotes from Cummings, but more importantly they will also glean why so many loved him. Weatherford and Freeman paint a tender picture of the leader that shows his sensitivity and concern for others, rooted in his religion, that spanned his entire life. The book opens with a speech written by Nancy Pelosi, and the backmatter includes an excerpt of a statement from the Congressional Black Caucus. There's also a timeline of Cummings' life, a bibliography, and the sources of the direct quotes made by Cummings on each spread… Pays due honor to Elijah Cummings' memory and his dedication to the people he served.” –Kirkus Reviews