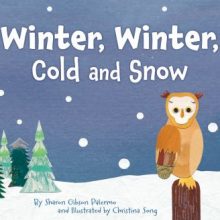 Come to the Trove on the second floor and enjoy our winter StoryWalk book, Winter, Winter, Cold and Snow written by Sharon Gibson Palermo and illustrated by Christina Song. Join Chickadee, Bear, Rabbit and a host of other friendly forest animals on a quiet journey through a winter day. The colorful cut-paper illustrations present a joyful depiction of the forest critters and their winter habits!

35 Indoor Activities for Winter When You're Stuck Inside

Iguanas in the Snow and Other Winter Poems/Iguanas en la nieve y otros poemas de invierno by Francisco X. Alarcón
Library Catalog
hoopla
Libby
This bilingual collection of poems invites young readers to celebrate winter at the seashore, in San Francisco and in the redwood forests of the Sierras.

A Thousand White Butterflies by Jessica Betancourt-Perez, Karen Lynn Williams & Gina Maldonado
Library Catalog
hoopla
Libby
Newly arrived from Colombia, Isabella's first day of school in the United States is canceled because of snow and when Isabella notices a girl playing outside she makes a new friend, despite the language barrier.

The Mitten: A Ukrainian Folktale by Jan Brett
El mitón: un cuento folclórico ucraniano by Jan Brett
Library Catalog
Libby
One by one, animals in a snowy forest crawl into Nicki's lost white mitten to get warm until the bear sneezes, sending the animals flying up and out of the mitten. On each turn of the page, signature borders inspired by Ukrainian folk art hint at what animal is coming next.

SkySisters by Jan Bourdeau & Brian Deines
Library Catalog
Libby
Two Ojibway sisters set off across the frozen north country to see the SkySpirits' midnight dance. It isn't easy for the younger sister to be silent, but gradually she begins to treasure the stillness and the wonderful experiences it brings. After an exhilarating walk and patient waiting, the girls are rewarded by the arrival of the SkySpirits — the northern lights — dancing and shimmering in the night sky.

Ten Ways to Hear Snow by Cathy Camper & Kenard Pak
Library Catalog
Libby
Walking to her grandmother's home to help make warak enab, Lina discovers many ways to hear snow, from the scrape of a shovel on a sidewalk to the quiet pats of snowman-building.

The Snowy Day by Ezra Jack Keats
Un día de nieve by Ezra Jack Keats
Library Catalog
hoopla
Libby
In 1962, a little boy named Peter put on his snowsuit and stepped out of his house and into the hearts of millions of readers. The Snowy Day transformed children's literature with its pioneering portrayal of an African-American child and the charming story and artwork that won it the Caldecott Medal.

Ty’s Travel’s: Winter Wonderland by Kelly Starling Lyons
Library Catalog
Libby
Imagination and play are highlighted in this festive Winter story, perfect for sharing with children 3 to 6. Ty's big imagination takes him and Momma on a trip to the North Pole. Everything is wonderful! – a Christmas tree sparkles, a snowman waves, and a polar bear sings!

Snow by Uri Shulevitz
Library Catalog
hoopla
As snowflakes slowly come down, one by one, people in the city ignore them, and only a boy and his dog think that the snowfall will amount to anything.

My Footprints by Bao Phi & Basia Tran
Library Catalog
hoopla
Libby
Upset after being bullied, Thuy, a Vietnamese American, pretends she is different creatures, including an especially strong, wonderful being made up of her two mothers and herself. Includes note about the phoenix and the Sarabha.

How to Catch a Snowman by Adam Wallace & Andy Elkeron
Library Catalog
hoopla
Libby
Our heroes' entry for the snowman contest has magically come to life – and ran away! Can you help catch it? Get ready for snow much fun as you travel through a winter wonderland with running, skating, and bouncing through trap after trap to catch the snowman and claim the winning prize. Will the snowman teach our heroes a lesson they'll never forget?