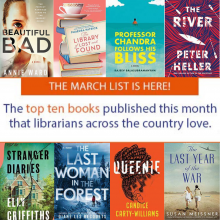 My Lovely Wife by Samantha Downing

Published: 3/26/2019 by Berkley
“An incredible, dark, twisty psychological thriller with two of the most seemingly normal but disturbingly depraved people you will read about in fiction. This brilliant debut needs to be at the top of your must-read list. For readers who like taut suspense and works by Gillian Flynn, B.A. Paris, and Mary Kubica.”—Rachel Reeves, Weatherford Public Library, Weatherford, TX

Beautiful Bad by Annie Ward
Published: 3/5/2019 by Park Row
“Maddie the innocent travel writer and Jo the wild child are living quite the life abroad when Ian crosses their path and changes both their lives permanently. Moving backward and forward in time, the narrative slowly reveals hidden truths. For fans of Paula Hawkins and Ruth Ware.”—Selena Swink, Lake Public Library, Lake, MS

Published: 3/12/2019 by Grove Press
“Lush and wonderful language, characters, and worldbuilding make this an enjoyable read for fans of historical fantasy. The relationship between concubine Fatima and mapmaker Hassan is multifaceted and compelling. A good choice for readers who liked Uprooted and City of Brass.”—Nora Walsh, Princeton Public Library, Princeton, NJ

A Dangerous Collaboration by Deanna Raybourn
Published: 3/12/2019 by Berkley
“In this fine addition to the series, Veronica Speedwell joins Stoker and his brother on an island off the British coast, attempting to solve a years-old mystery about the disappearance of a young woman on her wedding day. Recommended for fans of historical Victorian fiction, murder mysteries, and lepidoptery.”—Jill McKinney, Gunnison County Library, Gunnison, CO

The Last Woman in the Forest by Diane Les Becquets

Published: 3/5/2019 by Berkley
“A suspenseful, surprising story that begins with every woman’s worst nightmare–a breakdown on a lonely road in the middle of the night and a bad feeling about the handsome guy who stops to help. This kick-in-the-gut start leads to a more thoughtful mystery with a big twist. Recommended for fans of Lee Child.”—Patricia Uttaro, Monroe County Library System, Monroe, NY

The Last Year of the War by Susan Meissner
Published: 3/19/2019 by Berkley
“The story of two teenage girls who forge a life long friendship in an internment camp in Crystal City, Texas. For fans of historical fiction and readers who enjoy stories about immigration experiences and life during wartime.”—Kimberly McGee, Lake Travis Community Library, Austin, TX

The Library of Lost and Found by Phaedra Patrick

Published: 3/26/2019 by Park Row
“Martha Storm volunteers at the local library and has a tendency to help others over taking care of herself. One day she receives a mysterious book from the grandmother she believed dead and begins digging into her family’s past. Who doesn’t love a book about books? For fans of Elizabeth Berg and Fredrik Backman.”—Shari Suarez, Genesee District Library, Genesee, MI

Professor Chandra Follows His Bliss: A Novel by Rajeev Balasubramanyam
Published: 3/26/2019 by The Dial Press
“When Chandra fails to win the Nobel Prize in Economics, again, then suffers a heart attack, he decides to make changes in his life. A humorous journey of self-discovery similar to Major Pettigrew’s Last Stand and The Unlikely Pilgrimage of Harold Fry.”—Lora Bruggeman, Indian Prairie Public Library, Darien, IL

Published: 3/19/2019 by Gallery/Scout Press
“Queenie, a 25-year-old British-Jamaican woman, struggles to have a sense of purpose after being dumped by her white boyfriend. This humorous and timely debut sheds light on society’s fetishization of black women and its impact on family, relationships and mental health.”—Molly Riportella, Westwood Public Library, Westwood, MA

Daisy Jones & The Six: A Novel by Taylor Jenkins Reid

Published: 3/5/2019 by Ballantine Books
“Like the best episodes of Behind the Music, this chronicle of the rise and fall of a fictional ’70s rock group is impossible to resist. You’ll be tempted to look up the band’s hits, only to disappointedly remember that they don’t exist. A great rock ’n’ roll ride for readers.”—Becky Bowen, Kenton County Public Library, Erlanger, KY

The Stranger Diaries by Elly Griffiths
Published: 3/5/2019 by Houghton Mifflin Harcourt
“The author of the Ruth Galloway novels pens a chilling, atmospheric standalone. After a colleague is found dead, English teacher Claire Cassidy discovers messages from the murderer in her own private journal. Perfect for fans of both classic gothic horror and contemporary murder mysteries.”—Dawn Terrizzi, Denton Public Library, Denton, TX