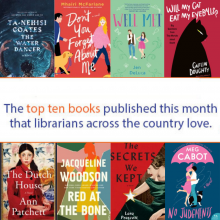 Here are the top ten books published in September that librarians across the country love. Just click on a title or book cover to place it on hold.

Red at the Bone: A Novel by Jacqueline Woodson

Published: 9/17/2019 by Riverhead Books
“A rich, multigenerational weaving of two families, starting at Melody’s coming-of-age party. She wears the dress her mother didn’t get to wear because she was pregnant with Melody at the time. Alternating narration moves forward and backward in time, reflecting on family, desire, identity, and parenthood. For fans of Jesmyn Ward and Brit Bennett.”—Julie Graham, Yakima Valley Libraries, Yakima Valley, WA

Bringing Down the Duke by Evie Dunmore
Published: 9/3/2019 by Berkley Jove
“Oxford student Annabelle is knee deep in the suffragette movement. The Duke is wary of supporting a cause not in the crown’s best interest, but can’t deny his attraction to Annabelle. A well-done version of the enemies-to-friends-to-lovers story. Perfect for fans of Juliana Gray and Amanda Quick.”—Amanda Brill, Rowan Public Library, Salisbury, NC

Don’t You Forget About Me by Mhairi McFarlane

Published: 9/10/2019 by William Morrow Paperbacks
“Aspiring writer Georgina, broke and a mess, gets a job at a bar owned by Lucas, whose heart she broke in high school. This fresh, funny story has just the right amount of sexual tension, and well-developed, relatable characters. A must-read for rom-com fans of Jane Green and Mary Kay Andrews.”—Theresa Bond, Middlesex Public Library, Middlesex, NJ

The Dutch House by Ann Patchett
Published: 9/24/2019 by Harper
“For siblings Danny and Maeve, the Dutch house is much more than a structure. It is the bones of their family, a symbol connected to love, loss, achievement, and abandonment. They are connected to this house all their lives, even after being flung out of it. For fans of Anne Tyler and Anna Quindlen.”—Kelly Currie, Delphi Public Library, Delphi, IN

The Long Call by Ann Cleeves

No Judgments by Meg Cabot
Published: 9/24/2019 by William Morrow Paperbacks
“Bree moves to the Florida Keys after a devastating breakup. When a hurricane threatens to wipe out the town, she refuses to evacuate and scrambles to protect the pets her neighbors were forced to leave behind. I don’t know if Little Bridge Island is a real place or not but it officially has a place in my heart. For contemporary romance fans like Unhoneymooners by Christina Lauren and The Hating Game by Sally Thorne.”—Amber Greenwood, Edgewood Public Library, Edgewood, MD

The Secrets We Kept: A Novel by Lara Prescott

Published: 9/3/2019 by Knopf
“Inspired by a true story of Dr. Zhivago. Pasternak had finished his controversial novel and needed to get it out of Russia to be published. A CIA agent posing as a typist is trained by another female operative and the two work to save the Cold War masterpiece. For readers who enjoyed The Red Sparrow by Jason Matthews and Sweet Tooth by Ian McEwan.”—Mamie Ney, Auburn Public Library, Auburn, MA

This Tender Land by William Kent Krueger
Published: 9/3/2019 by Atria Books
“Odie and company escape a sadistic boarding school and travel through Depression-era America, meeting angels, devils– and everyone in between–along the way. It’s like Huck Finn and friends meet the Odyssey. For fans of Wiley Cash’s This Dark Road to Mercy and Louise Erdrich’s The Round House.”—Lori Hench, Baltimore County Public Library, Baltimore, MD

The Water Dancer by Ta-Nehisi Coates

Published: 9/24/2019 by One World
“A gorgeous novel blending historical fiction and magical realism to create a powerful portrait of the people who made up the Underground Railroad. For readers who enjoyed Beloved by Toni Morrison and She Would Be King by Wayetu Moore.”—Mara Bandy-Fass, Champaign Public Library, Champaign, IL

Well Met by Jen DeLuca
Published: 9/3/2019 by Berkley Jove
“Emily has been through a rough patch and needs a new start. Where better to start than a small town that puts on a Ren Faire every year. At first she thinks it’s silly, but a handsome pirate soon changes her mind. For fans of Red, White, & Royal Blue by Casey McQuiston.”—Michelle Herring, Naperville Public Library, Naperville, IL

Will My Cat Eat My Eyeballs? by Caitlin Doughty

Published: 9/10/2019 by W.W. Norton & Company
“Mortician Doughty’s latest explores everything you always wanted to know about death but were afraid to ask. From learning why corpses change color to whether you could preserve yourself in amber, readers who enjoy asking weird and wild questions will love this book.”—Erin Manning, Westlake Porter Public Library, Westlake, OH