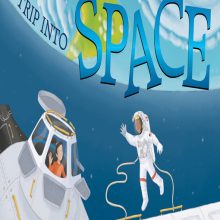 Sky gazing can be a fun experience-whether you are outside in your backyard, camping or simply looking up at the sky. You can start by becoming familiar with the constellations in the sky-such as The Big Dipper (which for me is the easiest to spot). There are also some wonderful free apps that you can use on your phone to become better at sky gazing.

According to NASA “a meteor is a space rock—or meteoroid—that enters Earth's atmosphere. As the space rock falls toward Earth, the resistance—or drag—of the air on the rock makes it extremely hot. What we see is a “shooting star.” That bright streak is not actually the rock, but rather the glowing hot air as the hot rock zips through the atmosphere.”

NASA also advises to plan ahead for a meteor watch since peak viewing times vary each year. Keep your eyes out for Perseids which are active between July 14th and August 24th. Also, the conditions of the sky can affect if you will be able to view a meteor shower so be prepared by checking the weather.

ABCs of Space by Chris Ferrie
This is a wonderful book that introduces young children to the world of astronomy! The illustrations are a delight for anyone who wants to learn more about space.

written to the rhyme of “There was an Old Lady who Swallowed a Fly.” The book is silly and fun and the illustrations are also wonderful. Check out the Stellar Black Hole Facts at the end.

LEGO Women of NASA: Space Heroes
This book is a wonderful treat for anyone who wants to learn more about the first female astronauts. It’s not only inspiring, but it incorporates LEGO, which is perfect for STEAM readings and projects.

A Trip Into Space by Lori Haskins Houran

Taking a walk without any ground, FLIPPING in space…a wonderful book that uses rhyme to introduce children to the vocabulary that is used by astronauts. At the end of the book children can learn about how astronauts keep from floating off into space and other facts such zipped up in space: how astronauts sleep.

Monsters in Space–Galaxy Zach by Ray O’ Ryan
Zack finds a monster in school and becomes terrified…until he finds out the monster has a name. The monster's name is Al! Zach becomes friends with Al, visits Al’s planet, and meets other friendly monsters!

“These four African-American trailblazing mathematicians worked as NASA computers before machines performed mathematical computations for the space program despite sexism and segregation that made their jobs extremely difficult.”—Kirkus Review

“In a galaxy far, far away, a young girl and her motley crew of friends fight to save her father and the solar system from a destructive fleet of space whales.”—Kirkus Review