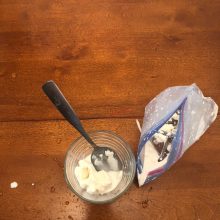 STEAM at Home: Make Your Own Ice Cream

There is nothing more satisfying than having a cool snack in the summer, especially when it is really hot. For example, you can mix granola in yogurt along with some fruit for a refreshing, healthy snack. You can also cut cubes of melon and place them in ice trays in the fridge; for a variation on melon pops you can try this Korean recipe. If you are craving ice cream, you can even make homemade ice cream.

We’ll follow these guidelines to make the ice cream. First, gather all of the materials and place them on the kitchen table. You can begin by asking your child a few questions:

Add the half-and-half, sugar and vanilla to the quart size freezer bag, and tightly seal it. Next, place the ice and salt inside the gallon size freezer bag. You can create a counting game with the next step: count ten cups to fill the gallon size bag. Place the smaller bag inside the larger bag, and tightly seal the larger bag. Vigorously shake and toss the bags for about ten minutes, or until the ice cream is frozen. Try playing some music as you shake for ten minutes!

Emily's blog post gives this great explanation of the science behind this experiment:
“The liquid half-and-half mixture changed state from liquid to solid, meanwhile the ice changed state from solid to liquid. Heat transfer occurred between the two substances – the ice melted because it absorbed energy from the cream mixture, turning the cream mixture into frozen ice cream.

You should have noticed that the volume of the ice cream is now close to 1 cup. The volume increased from 1/2 cream to 1 cup ice cream due to air bubbles being added as we tossed the bags around, and due to the ice crystals expanding as they formed in the ice cream.

We added salt to decrease the temperature at which the ice melts. The more salt you add, the faster the ice cream will freeze. But be careful, because if ice cream freezes too fast it is grainy. If it freezes too slow it will be soft. Try it making several batches with varying amounts of salt like they did on From Engineer To SAHM’s post.” 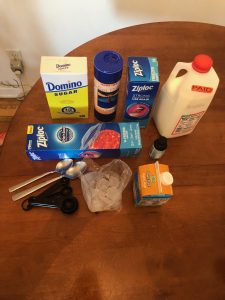 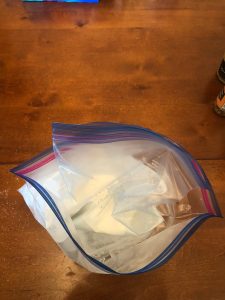 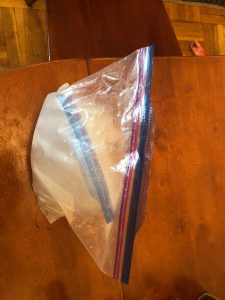 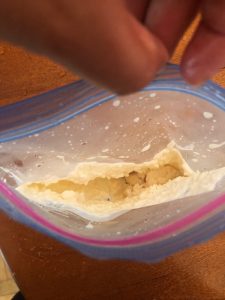 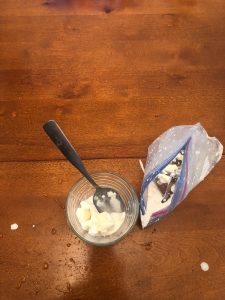 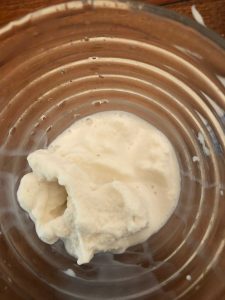 OverDrive Resources:
My First Cookbook by America's Test Kitchen
This is a wonderful book that breaks down recipes in many different ways. My First Cookbook defines vocabulary such as melt, boil, and whisk. The book also explains prep steps (such as how to melt butter) along with how to weigh ingredients and kitchen math. You can try to make strawberry mango smoothie bowls or frozen banana bites.

Our Food: A Healthy Serving of Science and Poems by Randa T. McKneally and Grace Lin
In this picture book we learn about the science behind food. What makes fruit so sweet? Why are so many vegetables green? There are also fun scientific facts about why popcorn pops and why some cheeses are stinky.

The Complete Baking Book for Young Chefs by America's Test Kitchen
This cookbook for kids explains cooking terms such as baking powder, yeast, and mince. The book also has directions for measuring ice water and how to use a scale. The visuals make it easy to understand different tools in baking. You can try the recipes for popovers, soft pretzels, or personal pizzas.

Yasmin the Chef by Saadia Faruqi and Hatem Aly
Yasmin, a precocious child who loves to cook, is getting ready for a party with her family. She even has a special recipe: chicken, veggies, and rainbow fruit kebab!
Yasmin also speaks two languages: English and Urdu. At the end of the story readers are encouraged to learn Urdu with Yasmin. Did you know that biryani is a saffron rice dish, or that chaat is a spicy snack? The book also includes a Pakistani fun fact, and how to write Salam (which means hello and peace.)

Saffron Ice Cream by Rashin Kheiriyeh
Rashin recalls her life in Iran (driving with her family and listening to Persian music) and compares it to riding the subway in New York (and also listening to different types of music). Rashin wonders how Coney Island will compare to the Caspian Sea. When her family reaches the beach, Rashin sees the ice cream sellers and asks for saffron ice cream. She is sad to learn they don’t have saffron but enjoys the chocolate crunch. Rashin also makes a new friend at the beach.

Splat the Cat: I Scream for Ice Cream by Rob Scotton
When Splat and his friends take a field trip to the ice cream factory they are all excited and can’t wait to eat ice cream. However, the lecture isn’t as interesting as eating ice cream. Splat accidentally sets off an alarm and his class must find their friend Seymor. They eat ice cream in each room (this is how you clean rooms when you are trying to find your friend of course!) in hopes of finding their friend. A fun and light hearted book!