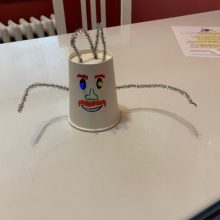 White Plains Public Library’s Grab & Go STEAM kits are a great way to unplug and be creative while learning about a STEAM concept. Edge Librarian Erik Carlson has put together a great STEAM activity for Grades 4-8 that allows you to create your own LED creature. The LED Creature Grab & Go kit will help young scholars learn some basic elements of electricity. If you have ever wanted to work on a conductivity experiment, or create a circuit bug or creature, here’s your chance! This kit will be available for pickup outside the Library's main doors on Monday, December 14.

Before you make your creature, let’s talk some more about the STEAM concepts involved in this project.

What is an LED?
LED is an acronym that stands for Light Emitting Diode. An LED is a type of light bulb, an electrical component that emits light when electricity flows through in one direction, from the Anode (positive side) to the Cathode (negative side). Fun fact: LED use less energy and produce more light than incandescent bulbs!

What is a circuit?
Think of a circuit like a circle. Electricity flows from one side of the battery, through a conductive material (the wire/lead), to the light which turns it on. The electricity then continues to flow through the other lead to the other side of the battery. Electricity needs to flow in a circle like this, no right turns or figure 8’s. If the leads cross, then the light will not turn on. Knowing this, can you imagine how a light switch might work?

Follow the instructions provided in Erik’s video and the helpful websites as you design your LED creature. And don’t forget to have fun!

Draw and color in a face on your paper cup. Be as creative as you want.

Next we’ll add the LED lights. Take the LED lights and coin cell batteries. Test each LED light to make sure it works. Look at each light. There will be 2 wires, or leads, attached to the light. One lead will be longer than the other; this is your “+” lead. Look at your batteries: the flat side will have a “+” on it. Touch the long lead to the “+” side of the battery, and the short lead to the other side of the battery. Don’t worry, you will not electrocute yourself. The light should come on. If it doesn’t, there may be something wrong with the light. Check each LED.

Figure out where you want the LED lights on the face. They could be the eyes, or the nose, or even ears… it’s all up to you.
Poke two small holes in the cup where each light will go, making the holes wide enough for the leads to easily fit through. This next part is where having little fingers comes in handy. You are going to tape the LED to a battery inside the cup, then tape the battery to the side of the cup. Start with connecting the “+” lead to the “+” side of the battery. Then tape the negative lead to the other side of the battery. The LED should light up. If it doesn’t, then check the sides again and re-tape it. Once it is lit, tape the battery to the side of the cup. Repeat this step using the other LED and battery.

Finally, finish decorating your cup face with pipe cleaners. For example, you can give your creation arms or hair. Be as creative as you want. Once it is finished, take a picture and send it to us! We would love to see what you have made. 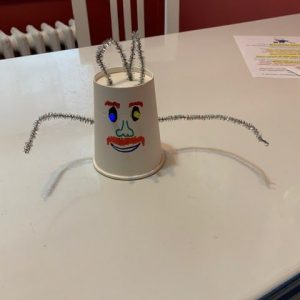 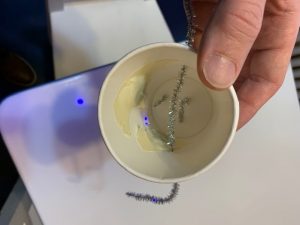