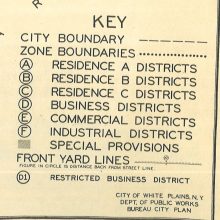 The words “urban renewal” are never far from the lips of anyone familiar with White Plains' history over the past 60 years. But what exactly do we mean when we use the phrase “urban renewal?” Most people use the words to describe the transformation of the area bordered on the east and west by Mamaroneck Avenue and the train tracks and on the north and south by Barker Avenue and Post Road, respectively. The term itself comes from the mid-1950s when the language of policy, legislation, and city planning took on a progressive tone that left behind the moralizing sensationalism of the earlier 20th century. The roots of what we call “urban renewal” lie in the 1930s when residents of the city began a public discourse about the conditions of its central area.

America was primarily a rural country by the late 19th century, with only 20% of the national population living in cities in 1880. By 1960, that percentage rose to 70%. During those 80 years, there was a lack of standardization in urban growth and local governments exercised little control over the conditions within the most crowded areas. By the early 20th century, grave problems of housing, disease, and social conflict were being exposed by Progressive Era reformers. Well-intentioned as these reformers may have been, their work usually linked housing conditions to social problems and relied on public outrage (often drummed-up through sensational pictorials or work of dubious journalistic integrity) to create the political will for change. 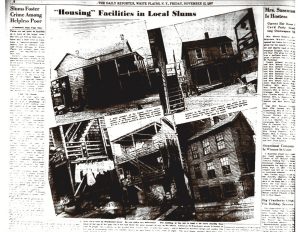 Article from the November 12, 1937 edition of the Daily Reporter 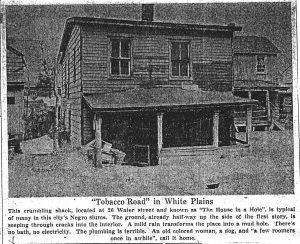 Picture and caption from the November 11, 1937 edition of the Daily Reporter

Consequently, public awareness of slums and substandard or obsolete housing was high by 1929. Reports commissioned by the government and the opinions of experts, politicians, and social activists all labeled the situation in America's densest urban areas dire. The cliff-dive residential construction took in the early years of the Great Depression confirmed their views and worsened conditions in cities. Through a mix of influences–a lack of city planning, the growth of the suburbs, the increased use of automobiles, and the Great Depression–areas developed in White Plains that met with popular understandings of slums.

By the late 1930s, there was a vibrant public discussion of slums and how to improve living conditions in the city of White Plains. A series of articles in the Daily Reporter, written by Norton Mockridge, presented a version of living conditions in White Plains' worst homes. Mockridge used photographs and lurid descriptive passages to lobby for action by the city government. He, along with William O'Donovan, the editor of the Daily Reporter, continued the Progressive Era-tradition of conflating the physical conditions of urban areas with the character of the people who lived there, a false idea dubbed “environmental determinism” by later scholars.

In a December 29, 1937 article, William O'Donovan was quoted as offering the following assessment of White Plains at a public meeting on the topic:

Where previously families of means established themselves within easy walking distance of the railroad station and market places, and built substantial homes in a concentrated neighborhood, today the second and third generations of these families, and people like them, find it not only desirable, but almost necessary, to live in developments one, two and three miles from the station and the market places…. removing these families from the center of the old village, has left blighted areas which have gradually turned into slums, or into sections bordering on slums.

In a series of articles from November 1937, Mockridge made claims like: “Without doubt crime, disease and vice thrive quickly enough in other areas, but in the slums– guarded by the low morality and living standards — they reap a fecund harvest, find many loyal adherents.” He described slums as “dirty, dank breeding places of vice, crime and disease” that would “spread like festering sores unless corrective measures are promptly taken.” In case there was any doubt about who Mockridge was concerned about, he wrote this assessment:

…this city is losing its better-class colored families and is getting in their place, a decidedly undesirable class which is only partially self-supporting and is certainly no credit to the community… Eliminate the slums and you eliminate much of your undesirable class. Prevent the undesirables from coming into the city and you stop your slums from growing. It works both ways.

Mockridge and O'Donovan's views are classic examples of environmental determinism. Overt and subtle expressions of classism and racism are also present. Economic and racial prejudice is an important part of the context for many stories of change in America's cities and White Plains is no exception. 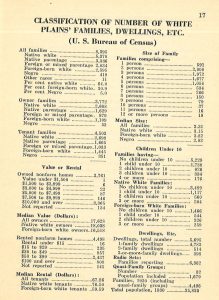 Statistics from a White Plains Chamber of Commerce publication, 1933-1934 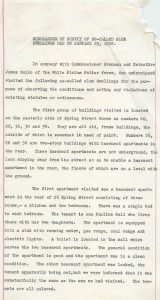 “Memorandum of Survey of So-called Slum Dwellings had on January 25, 1938.” First page of a report commissioned by the city.

In spite of hostility from journalists, politicians, and other residents, White Plains' population continued to grow. Between 1920 and 1930, the city's population increased 70.3%, from 21,031 to 35,830. Such large growth was bound to create strong feelings. But how did White Plains move forward, faced with the internal burden of citizens calling for action and the increasing volume of newer residents? The answer can be found in the White Plains Collection (and future blog posts). Unsurprisingly, it involved financial assistance from the state and federal government, the convening of public committees, audacious plans, and vigorous debates we continue today.

Recommended reading on slum clearance and urban renewal from the Library's collection: