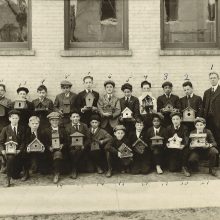 In the 1960s, northern as well as southern communities were forced to desegregate their schools to achieve educational equity between races. The White Plains Collection contains a number of sources for learning more about the desegregation that took place here under the Racial Balance Plan. Multiple reports issued by the Board of Education as well as a report from a committee of citizens provide statistical and administrative assessments of the plan. For a more sociological view, the slim volume Children In The Balance does a remarkable job of revealing what classrooms were like in the years after the plan was instituted.

White Plains found itself with a segregated school system in the late 1950s, years after Brown V. Board of Education and the Federal mandate to end school segregation. School segregation in White Plains persisted largely because of housing segregation, and when urban renewal and slum clearance work reshaped the historically black neighborhoods of White Plains, recreating affordable, quality housing for the people of the neighborhood was not a priority (D'Amore 10). Through the efforts of people like Errold Collymore and public committees, some affordable housing was built in the city. However, construction of affordable housing was restricted to specific areas, and the city's pattern of racial segregation in housing largely continued as it had before urban renewal. In 1963, as some of the most dramatic building projects were beginning, the New York State Commissioner of Education sent a letter to school districts directly confronting the issue of racially imbalanced schools. The letters defined these as any schools which were more than 50% black. These schools were almost always underfunded and low-performing, with dismal academic evaluations and poor building conditions. The Rochambeau School in White Plains was one such school, and in the early 1960s, it was 62% black (D'Amore 10).

In 1964, the White Plains School Board, under the energetic leadership of superintendent Carroll Johnson, instituted a plan which was meant to more evenly distribute black students throughout the elementary schools in White Plains. It was hoped this would improve learning outcomes and stabilize the social and physical conditions in all schools. They decided elementary schools should have no less than 10% and no more than 30% black students (D'Amore 11).  Although they made the decision unilaterally (the board was not required to put it to a public vote), the board took lots of time to work with the community on the roll out of the plan and the people of White Plains largely supported the plan. The Reporter Dispatch, along with city politicians, also supported the plan. The onlywell-organized opposition came from a citizen's group called the White Plains Committee on Schools.  They represented a minority of people who opposed the plan for economic reasons and, sometimes, because of outright racial prejudice (12).

Progressive though the Racial Balance Plan may have seemed, it generally fell in line with a tradition in White Plains of only confronting racial issues when they became dire, and even then, seeking solutions on terms most agreeable to those in power. For instance, in the Racial Balance Plan, there was no cross-busing, the practice of taking students from more affluent neighborhoods to schools in less affluent ones. D'Amore and Schlesinger saw the black community's response the plan in a few ways. First, they noticed that many black residents felt like they had no say in whether the plan happened or not, let alone any say in what shape it took. They chronicle the “tokenism” black members of the school board and PTA experienced. There were situations where boards or committees had one black member who was not in a position to seriously advance the interest of the people they represented. Second, they recorded some black residents' skepticism of the value of the plan. One community member was quoted as saying: “Busing black students to white schools only fosters racism.  If integration is so damned good,… y’all come and get some.’” (D'Amore 13).

Even black residents who supported the plan were aware that integration would bring new challenges. One mother put it this way:

[Black children] must be strong so that they can stand up to the pressure the school will put on them. Teachers will make them feel inferior, and white children will put them down. They must know who they are and that they are somebody, so that they won’t believe all the things the white world will tell them about themselves. (D'Amore 44)

Her view is corroborated by stories in Children In The Balance. The challenges were not just academic, and often had to do with students' lives outside of school–most often issues of poverty.  For instance, Graham, a black student, borrowed lunch money from the school and then had his name read over the public address system in the school to announce his and other students' debts to the school (D'Amore 77). Instances like this, in which black students were singled out in embarrassing ways or disproportionately targeted for discipline, were common. Rightly, the teachers who wrote Children In The Balance felt this had a pervasive, negative effect on students' morale and fragile sense of opportunity. 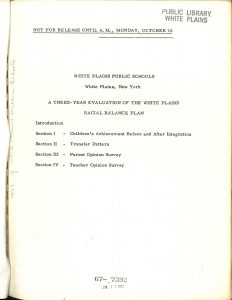 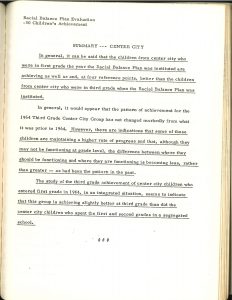 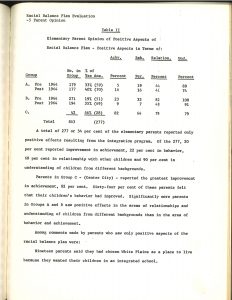 White Plains comes out looking pretty good if we judge the outcomes and effects of the Racial Balance Plan against those of communities in places like Boston or Little Rock. Overall, once the plan was underway things went smoothly. Elementary school students were successfully balanced along racial lines and teachers got down to the business of actually working with the children, though the issue of civil rights and race were never far from the minds of either group. D'Amore and Schlesinger recall:

The kids began to discuss civil rights issues.  Most of the white students had never fully realized before that these problems existed in their own city.  They all knew about discrimination against blacks in the South, but the majority rather vaguely and complacently believed that the North provided equal opportunity for all.  Face to face with the realities of an integrated classroom, they began to reevaluate their ideas and to debate the problems of contact between the two worlds. (D'Amore 18)

By bringing together white and black children and eliminating the segregation that stifled dialogue between people, the Racial Balance Plan moved White Plains residents toward a more honest reckoning with racism in their community. I will leave my analysis there, but if you'd like to develop your own evaluation or understanding of the Racial Balance Plan, come check out the reports, newspaper articles, records, and personal stories in the White Plains Collection. 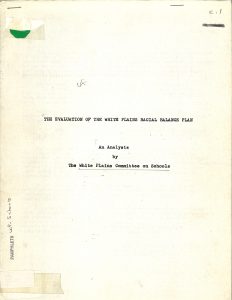 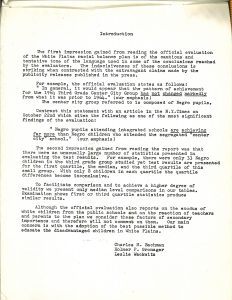 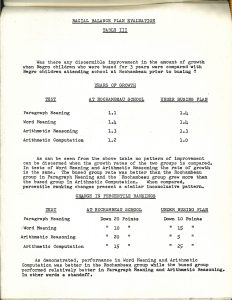 The featured image in the top left of the post is a picture of students at the Court Street School in 1918. They are holding birdhouses completed as part of a project for the then new Bronx River Parkway. Click here to see a list of the names on the back of the photograph.