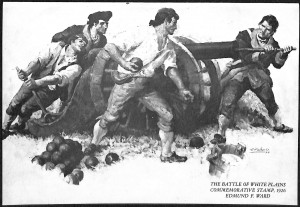 Through maps, pictures, animations, quotes, and narration, this video walks viewers through the background to the Battle of White Plains and the details of the engagement itself–especially the role of the many hills that define the borders of White Plains.

For those interested in interactive demonstrations of Revolutionary War camp life, the White Plains Historical Society is having their annual Anniversary Commemoration on Sunday, October 25, 2015.  The free event is at the Jacob Purdy House National Historic Site (Washington's Headquarters) at 60 Park Avenue in White Plains from 10:00 AM to 3:00 PM.